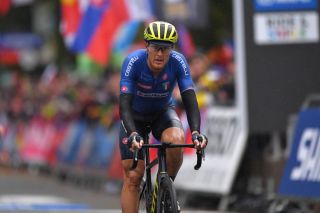 Matteo Trentin believes he and Greg Van Avermaet can complement one another and form a successful partnership in the orange of CCC Team in 2020.

After two seasons with Mitchelton-Scott, in which the European Championships and Trofeo Matteotti were his only one-day victories, Trentin is moving on to join the Olympic champion at CCC next year.

With both finding themselves somewhat isolated in their respective teams in the Classics this year, Trentin is confident they can play off each other and play the kind of numbers game so effectively demonstrated by his former team, Deceuninck-QuickStep.

“It’s a good advantage for both of us. If you see the last couple of years, we were always alone in the finale so, being on the same team, we can complete each other,” Trentin told reporters at the Saitama Criterium in Japan last weekend.

“I can be faster than him in a sprint of five or six or 10 guys, but he can make the race earlier, and then use me as someone who stays behind. Maybe he’s away and nobody wants to bring me back for free.

“In the end, that’s how QuickStep win so much,” he added, referring to Zdenek Stybar’s victory at this year’s E3 BinckBank Classic, where his teammate Bob Jungels led solo until 7km to go. “If you see how Stybar won that race, he pulled only at the moment he won the sprint.”

Trentin had hoped to be part of that sort of race dynamic at Mitchelton-Scott, but injuries to Luke Durbridge, who had enjoyed a fine 2017 spring campaign, left Trentin as the sole leader. He was tempted to stay for another two years, and had an offer on the table – along with approaches from a number of other teams – but decided to move to CCC.

“At Mitchelton we never got the chance to race 100 per cent as a Classics team, that has to be said,” Trentin said. “But Mitchelton are moving to be a GC-oriented team, so of course if you want to do one thing, you need to sacrifice the other one.

“I got the proposal from CCC and it took a long time to decide. There were others involved but at the end of discussions, the two options were to stay or go to CCC, and I decided to move on.”

With six victories, Trentin won as many races in 2019 as the whole CCC Team combined, yet he has no concerns about the quality of the outfit he’s joining or his responsibility within the set-up. The team lost half their riders after BMC ended their sponsorship and before a merger was struck with the CCC Sprandi team, but they are bolstering their roster ahead of 2020 with the signings of Ilnur Zakarin, Jan Hirt, Fausto Masnada, and others.

“You need to see their background,” Trentin said. “The guys who could leave for safe chance, they left, and only Greg, [Michael] Schar, [Fran] Ventoso and a few others stayed.

“It’s always difficult when you have two teams merging so late in the season, but I think they’re rebuilding themselves already.”

Trentin struck six times in 2019, but only one was what he’d describe as a top-quality victory: his solo ride into Gap on stage 17 of the Tour de France. It was a better campaign than his first with Mitchelton-Scott, but there was no getting away from a sense of frustration as he hit the minor steps of the podium 15 times, and placed in the top 10 on a further 22 occasions. The bitterest pill was, of course, his second place at the World Championships, when he was the more fancied rider in the home straight until Mads Pedersen emerged as the strongest.

“I got so many top 10s this year. You don’t race to be top 10, especially when you see the opportunity for a podium or victory – you go for that and you don’t go for eighth,” Trentin said.

Trentin can’t put his finger on a specific area for improvement, but is simply hoping everything comes together for him on a given day.

“If I can copy the consistency of this year, that’s already pretty good, but for sure the main goal next year is having less top 10’s and more victories, and having more quality victories.”