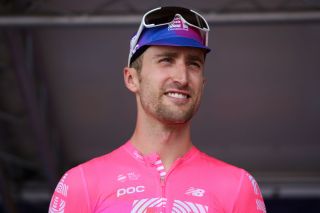 Taylor Phinney, the 29-year-old American who wore the Giro d'Italia's maglia rosa in 2012 but suffered a career-altering injury in 2014, is set to retire from professional bike racing.

Neither the EF Education First rider or his team confirmed the retirement, but  longtime Boulder, Colorado, friend of Phinney's and sports nutritionist Allen Lim posted an update on Instagram thanking Phinney "for all the miles." Comments from several former pros and industry insiders congratulated Phinney on the decision.

Rumours about Phinney's impending retirement have been widespread in the peloton since late summer. Phinney's last UCI race was the RideLondon Classic in early August. Before that his previous outing was at May's Tour of California, where he missed the time cut on stage 5 to Ventura.

Emails, texts and phone calls to EF Education First, team manager Jonathan Vaughters and to Phinney were not immediately returned Wednesday morning, but the team later confirmed Phinney's retirement after the Japan Cup on October 20.

Taylor Phinney: 'The vibe is good' before the Tour de France

Phinney surprises with a top-10 finish at Paris-Roubaix

Taylor Phinney, the son of 1984 Olympic road race champion Connie Carpenter Phinney and 7-Eleven sprinting legend Davis Phinney, began racing on the track as a junior and collected World Championship titles in the individual pursuit in 2009 and 2010.

On the road, he joined Axel Merckx's Trek-Livestrong development team in 2009 and immediately made an impression, winning the U23 Paris-Roubaix in both 2009 and 2010. He jumped to the WorldTour in 2011 with BMC Racing and established himself as a top time triallist, winning the prologue at the 2012 Giro d'Italia and wearing the pink leader's jersey for three days.

Phinney took 10 wins for BMC from 2011 to 2014, including the 2014 US time trial title. Disaster stuck just a few days later in the US pro road race, however, when he was forced to change his line in a downhill corner to avoid an official's motorcycle and crashed heavily into some roadside barriers. Phinney suffered a compound fracture to his tibia and severed patellar tendon.

Phinney required 14 months to recover from the injuries, but he returned to racing in August of 2015 and quickly won a stage at the USA Pro Challenge in Colorado to confirm his comeback. Over the following four seasons, he added only one more win, however, taking the US time trial title in 2016.

Phinney showed signs of brilliance again last season with eighth in Paris-Roubaix, but his 2019 performances once again lacked the potential he showed earlier in his career.