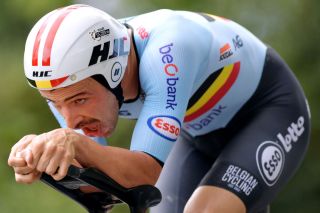 Victor Campenaerts drew his two-year spell at Lotto Soudal to a close at the final stage of the Tour of Guangxi ahead of his move to the rebranded Team NTT (formerly Dimension Data) next season.

Reflecting on his final season with Lotto, the 27-year-old, who set the UCI Hour Record in April, saw positives and negatives in his campaign, but also lamented the bad luck that could yet affect his plans for 2020.

"The main goal was the Hour Record, of course, so that was super good," Campenaerts told Cyclingnews in Liuzhou ahead of the penultimate stage. "Then I had some good results, a lot of second places, a win in Tirreno-Adriatico. The second main goal was the World Championships, but that didn't really work out because of some bad luck."

Campenaerts, who was denied a victory at the Giro d'Italia's San Marino time trial after suffering a late mechanical, met a similar fate in Yorkshire. The 54km test saw him end up in 11th place, almost two minutes down on winner Rohan Dennis, after first crashing and then being forced to change bikes due to mechanical problems.

While the Giro snafu is far enough in the past to have put to the back of his mind, it's the Worlds that still stings Campenaerts.

"It's already half a year ago," he said of the San Marino stage. "The World Championships are fresher in the mind because I was in such good shape. With only the crash I would've been on the podium, but then the chain problems made it impossible to be on the podium. That was more shit."

The result in Yorkshire could have further-reaching consequences, too. Belgium's Olympic Committee rules mean that a top-eight finish at the Worlds, or a top-five finish at the European Championships, would guarantee selection for next year's Tokyo Olympics time trial.

Campenaerts opted to skip the latter, a race he won in 2017 and 2018, and after his bad luck at the Worlds, his place in the two-man time trial team for Tokyo is up in the air. Meanwhile, Remco Evenepoel is already assured of a spot courtesy of his gold and silver medals at the Euros and Worlds.

A further complication for Campenaerts is the fact that riders entered for the time trial are obligated to form part of the five-man road race squad, too, and with a mountainous course on the menu, a rider like Laurens De Plus or Wout van Aert might be preferred.

"Now I can choose a second time trialist to be selected," Belgium coach Rik Verbrugghe told Cyclingnews, after confirming the intricacies of the selection criteria. "It can be Campenaerts, or I don't know what will happen with Wout van Aert next year.

"But it's true that if you take a time trial specialist then you lose a guy for the road race – they would drop off at the feed zone to focus on the TT. Remco can do both, but it will be a difficult choice to make the call for the second spot.

"De Plus is also someone who can do both. But we will see. It's a little bit early. I want to speak to all the riders, while the race planning is also up to them, because a combined Tour de France and Olympics is difficult."

Campenaerts, meanwhile, already has a contingency plan on his mind, with the final time trial of the Tour de France coming up as a possible major goal for 2020.

"If it doesn't work out to go to the Olympics, then I have a good option at the Tour de France closing time trial. It's more or less the same parcours as the one I should have won at the Giro this year, so that should be a good option."

But beyond his race goals for next season, a general improvement across the board is something to aim for too. Campenaerts said that a small improvement – and some luck – could see him taste victory at every time trial he starts.

"Of course, I want to gain something like one per cent in my TTs, and then I think I can win all the TTs I start, with some luck. It won't be easy – we still have to be 100 per cent sure that I'm selected for the Olympic Games, but that would be the main goal."