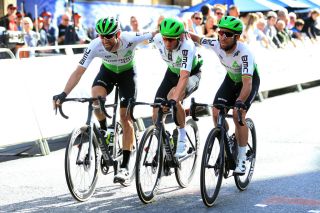 Mark Renshaw hung up his wheels on Saturday, crossing the finish line arm-in-arm with Mark Cavendish and Bernhard Eisel on the final stage of the Tour of Britain to bring the curtain down on a 16-year career.

The Australian announced in July that he would retire at the end of the season, and the week-long Tour of Britain was his last outing.

Renshaw to retire at the end of the season

Renshaw thrown in at the deep end at the Classics

Renshaw had his family in attendance, and stopped to collect a bidon held out by his young son along the route, in a touching moment that was captured on camera.

"I already cried in the race, I won't lie to you," Renshaw said. "It's an emotional time and I think it will get more emotional now in the next 24 hours."

Having helped Mark Cavendish to so many victories over the years, as one of the best lead-out riders in the sport's history, Renshaw finished the stage second last, with Cavendish in last place.

They were joined by Bernhard Eisel, a teammate of theirs at both Dimension Data and HTC Highroad, as they dropped off the back of the peloton and came home arm-in-arm.

"We spoke about it before we rolled in," Renshaw said of the gesture. "They're great chaps, two of my best teammates ever, so I'm really happy to finish together with them."

What a way to end a career. It was great to capture this special moment today with @Mark_Renshaw and his family at the @TourofBritain #BuiltByTheRide @TeamDiData pic.twitter.com/p0l6n46CdySeptember 14, 2019

A product of the Australian track programme, Renshaw turned professional on the road with FDJeux.com in 2004 before moving on to Crédit Agricole two years later. His time on the squad included victory in the 2006 Tro Bro Leon and a stage on the 2008 Tour Down Under, but he also developed a reputation as a lead-out man and was recruited by Highroad in 2009 to tee up Mark Cavendish in the sprints.

Renshaw won the Tour of Qatar in 2011 and, after three years in Cavendish’s service, Renshaw moved on to Rabobank in the following season in order to pursue his own ambitions as a sprinter.

He claimed three victories across his two seasons with the Dutch squad before returning to Cavendish’s side in 2014, this time at Omega Pharma-QuickStep. In 2016, Renshaw moved with Cavendish to Dimension Data, and he helped guide the Manxman to four stage victories on that year’s Tour de France.

"I know it’s the right time to step away from racing - my body and mind won’t allow me to perform and compete to the level that’s required for a race like the Tour de France," Renshaw said in July.

"I am very fortunate to be able to make the decision to finish this chapter of my life on my terms, and I’m hugely excited about my future ventures."