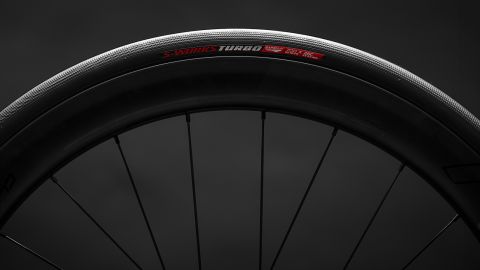 Specialized S-Works Turbo RapidAir is the fastest feeling 28C road tyre we’ve used, but still all-weather confident and really easy to live with. Available in 700 x 26C and 28C, the RapidAir tyres are the result of a long process of testing in Specialized's own factory dedicated to creating the best tyres. Specialized have been developing their new RapidAir tyre for 3 years working closely with the Deceuninck-QuickStep pro team on the evolution of their silica enhanced Gripton rubber compound and totally new carcass construction.

Most tyres overlap the carcass under the tread section to form a triple-ply sandwich with a puncture protection layer added under that. Instead, Specialized leave a gap in the centre of the carcass and then bridge that gap with a strip of its Black Belt puncture protection. The exact mix of overlap and materials were then tweaked with laboratory roller testing and exhaustive rider testing (including race pace testing on the final 120km of original Paris-Roubaix course).

Specialized is, unsurprisingly, keeping the exact final recipe secret but it says the overall durability balance is between the existing Turbo Allround tubular and Turbo clincher, but with tougher sidewalls and a reinforced high tensile bead with a 273psi burst pressure. The 28s also have increased protection and tread to reflect their likely all-rounder usage but, despite that, they’re still light for a 28mm tubeless tyre at just over 300g on our scales.

According to Specialized's claims, they are 2.8w faster than the S-Works Allround tubular tyre, at 7.0bar (101psi), at 25mph (40kph) and with a 45kg load (taking into account the two tyres sharing the load of the rider and bike). They also developed a new mixed filament sealant blend designed specifically to work over 72psi and seal holes up to 3mm long instantly.

Prototype tyres were then handed out to team riders who requested them over winter but only a few riders raced on them this season. This was primarily due to logistics as Deceuninck-QuickStep were already switching to discs and wheels this year and given that they go through over 2000 tubs in a year that’s a big ask. The riders that did use them scored some significant victories though, including two national championships and a stage of the Tour of California.

The first impression of the RapidAir tyres is exactly that - seriously rapid. In fact, they roll so quickly and quietly and sustain speed so well when you come off the power into a corner they feel too quick, triggering real worries about likely grip levels. That meant it took us a few rides to develop trust in the lightly treaded shoulders but once we were there, the tyres rewarded our trust with complete cornering confidence.

We’ve since been riding them in truly horrible, slippery leaf grease and biblical flood conditions in Yorkshire right down to frost point temperatures without any treacherous moments. They spin slightly earlier than dedicated winter tyres under maximum power in the worst conditions but there’s certainly no need to compromise your normal riding style.

Specialized has tried to put this into numbers, as seen below, using a lab test on which an angled concrete drum was used - both wet and dry - in order to test the load required before grip was lost.

A silent roll compared to most tyres reinforces the impression of standout speed and the tyres gave a definite psychosomatic boost as soon as we fitted them. Anecdotal sensations were confirmed with back-to-back wattage/speed testing on a range of surfaces which showed they’re extremely quick to the point where we struggle to disbelieve Specialized’s claims of being 5-10 per cent faster than its competition. The relatively low weight means they accelerate quickly for a responsive feel and that weight isn’t achieved by under-sizing - our samples actually came in just under 30mm on 21mm internal rims even at 60psi.

While we’ve only had two months on them, so can’t comment on mileage durability, we’ve ridden them hard across rough and potholed roads and been through plenty of thorn-covered debris without cuts or flats.

They’re also an absolute joy to install, popping onto rims with just a track pump to inflate them and holding air even before we added sealant. However, it is worth noting that while it’s fine for a couple of years on the shelf, the sealant itself only stays working for two to four months (depending on conditions) in the tyres, which is shorter than most.

Despite the generous sizing, the ride feel of the tyres isn’t as damped and ‘warm’ as the smoothest feeling 28s we’ve ridden. It's certainly not harsh, it's more purposeful than plush, but it is intended as a race tyre. It also happens to be - so far - an extremely impressive high-speed, high-volume all-rounder that is also refreshingly easy to live with.