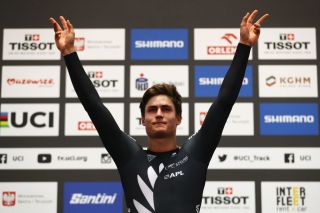 “It feels amazing to be up here in front of a home crowd. I can’t believe it,” Edmondston said after beating Olga Zabelinskaya (Uzbekistan) to the gold medal. Lydia Gurley (Ireland) claimed bronze with a fine display.

Georgia Baker and Alexandra Manly claimed gold for Australia in the women’s Madison. The Australian duo established an early lead by winning four of the six opening sprints, and they sealed a comprehensive victory by taking the final sprint for good measure.

The Polish duo of Daria Pikulik and Nikol Plosaj took silver, while Michaela Drummond and Jessie Hodges (Subway New Zealand) claimed bronze. “It was a pretty tough madison actually. Not too many teams out there, but it was definitely a tough mado for Alex and I,” Baker said.

“We were just focusing on trying to get a consistent ride.”

In the women’s sprint, Anastasia Voinova (Russia) edged out world record holder Kelsey Mitchell (Canada) 2-1 in a keenly contested final. Mitchell claimed the first race, but Voinova had the upper hand in the second and then won the decisive contest to take gold.

“It is such a long way to travel for this World Cup that the victory means so much more to me. I am so pleased,” said Voinova.

Steph Morton (Australia) beat Daria Schmelva (Russia) in the bronze medal final. “You know I am eight months post knee op so I wasn’t too sure what to expect. So to be able to come in not my fully my best and to get a good 200 time and then get on to the podium, I am so happy,” said Morton.

Home favourite Campbell Stewart (New Zealand) lived up to his billing by taking an assured victory in the men’s omnium. He began his day with 5th place finishes in both the scratch race and tempo race, before moving to the top of the standings by winning the elimination race and then sealing victory in the points race.

Cameron Meyer (Australia) took second place, 9 points behind Stewart, while Artyom Zakharov (Kazakhstan) claimed the bronze medal ahead of Eiya Hashimoto (Japan). The final points race was a hard-fought affair, but Stewart secured his triumph he beat Meyer and Zakharov in the penultimate sprint.

“It was just an awesome kind of day,” Stewart said. “I started off consistent and managed to hold off a fair few attacks from the top riders, chased them down, eventually got the sprints and got there in the end.

“I’ve been looking out for this for a while. I knew that I was going to be in front of a home crowd racing and they were awesome tonight. They were on their feet…and they really helped me get round.”

“It’s pretty surreal to be honest. It’s the best third place I’ve got in my career,” Glaetzer said.

“I exceeded my expectations by about three positions with this third place and very special in the considerations of what I’ve been through and it’s a credit to my team around me, just taking it one day at a time and not letting something get in your way.”

The gold medallist Awang will hope his ride in New Zealand augurs well for the Tokyo 2020 Olympics. “I’m so happy. It’s been a while since I stepped on the podium,” Awang said. “The last time was at the 2017 world championships and after that I took a few step backwards to build a base for Tokyo.”