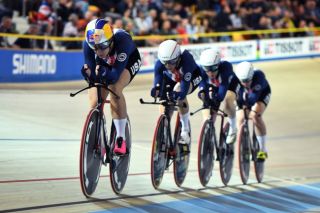 The United States powered to victory in the women’s team pursuit, as the quartet Chloe Dygert, Jennifer Valente, Christina Birch and Emma White clocked 4:13.762 in the final against Germany. Great Britain had to settle for 5th place, Italy beat France to the bronze medal. In the men’s team pursuit, Denmark beat France in the final, while Germany took bronze ahead of an Italian quartet that included Elia Viviani.