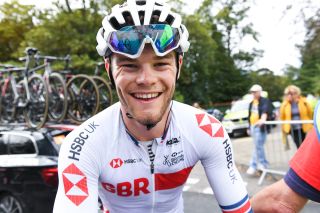 The Dutch team moved into the lead of the UCI Track World Cup medal standings, taking out two gold medals in the second day of event finals in Minsk, Belarus.

The seasoned women's Madison team of Kirsten Wild and Amy Pieters took the victory over Great Britain's Laura Kenny and Emily Nelson with the French squad of Clara Copponi and Marie le Net in third.

Great Britain, the Netherlands, France and the USA each gained a lap on the peloton, but the Americans could not match the medalists in the sprint and finished fifth behind Poland.

The British earned a second gold medal of the event with Matt Walls taking out the men's Omnium in a tense points race finale.  Walls marked his rivals to take two laps on the field, while Elia Viviani moved over Portugal's Rui Oliveira to earn the silver medal.

Denmark's Lasse Norman Hansen was hampered by a poor finish in the Elimination Race, but rebounded to challenge for the medals in the Omnium finale. He took three laps on the field but fell just four points shy of the final podium in fourth.

Racing continues on Sunday with the men's Madison and sprint finals and the women's Omnium and keirin.