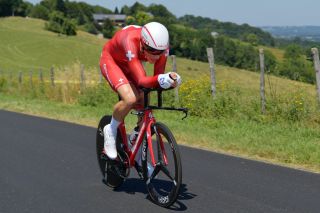 Stefan Küng (Groupama-FDJ) won stage 1b of the Tour of Slovakia. The Swiss time trial champion's time of 9:04 beat out the Deceuninck-QuickStep duo of Yves Lampaert and Bob Jungels by three and eight seconds on the 7.4km course in Bardejov.

Alexander Kristoff (UAE Team Emirates) who sprinted to victory on the morning stage, crashed during his effort, losing 54 seconds to Küng at the finish.

QuickStep's Elia Viviani, third on stage 1a, finishing 24 seconds down on the winner, five seconds up on Maciej Bodnar (Bora-Hansgrohe) who was provisional leader before Jungels and then Küng shot to the top of the leaderboard.