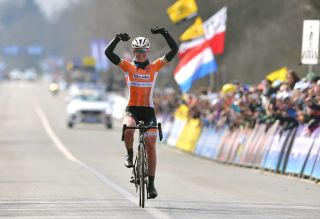 She's been world champion, Olympic chapion and national champion in the time trial, but Anna van der Breggen, until Saturday, never wore the jersey of Dutch road champion. That all changed on a windy, rainy day in Drenthe.

Van der Breggen overcame a mechanical with 3km to go to hold off the chase from world champion Annemiek van Vleuten (Mitchelton-Scott) and take a solo victory. Anouska Koster (Parkhotel Valkenburg) was third.

Due to the restrictions on public gatherings, the Dutch federation chose to hold the race on a short 7.3km circuit around the infamous climb, the VAM-berg, also known as Col du VAM. Although it only climbs 38 vertical metres the severity of the grade and 17 trips up it in short succession were enough to give Van der Breggen the edge.

"I'm not only proud of myself, but of the whole team," Van der Breggen said according to Wielerflits.nl. She played off an attack from teammate Jip van den Bos, bridging across along with Anouska Koster (Parkhotel Valkenburg) and then forging a winning gap well before the halfway point. Although World Champion Annemiek van Vleuten put in a spirited chase in the final laps she never got within sight of Van der Breggen.

"It is difficult to plan a race in advance, but our tactics came pretty close to what we had planned in advance," said Van der Breggen. "When there were six of us at the front, we had to create something, of course. We did that, although we never intended to lead the way for so long."

Van der Breggen called the course 'gruelling', saying she never quite believed she could win until the final lap when her advantage was over a minute. Even then, a puncture with three kilometres to go almost spoiled the day.

"Fortunately it was on a descent and the right decision was made from the support vehicle. My mechanic certainly didn't jump out of the bushes with that bike," she said after some questioned the legality of the bike change.

The 30-year-old announced earlier in the year that she would retire after the Tokyo Olympic Games, and said she will enjoy racing in the national champion's jersey for her final year.

Van Vleuten, who had gone undefeated over five one-day races so far this season, took the defeat in stride, saying it was the best she could do as the sole representative from her team. "I am proud that I took the initiative in the chase and went down fighting," she said on her personal website.

Having just come back from an altitude camp after winning Strade Bianche, she said it was a different effort. "Blasting up the VAM-berg for one minute is a bit different than riding up the Gavia or Stelvio, but this was fun."

"People might say, why were you not in it when Boels-Dolmans was ahead with two riders with Anna and Jip? But if I had, they wouldn't have kept riding. That was not an option." CCC-Liv also had a strong squad and made tactics tricky along with not getting any time differences from the race officials. "I didn't know the time gaps," Van Vleuten said. "It was apparently assumed that everyone had earpieces, but I was alone and didn't have one. So then you don't hear any time differences and the motorcyclist who passes it on was not there, either. Finally, I asked Marianne; shall we do something else? Her answer was yes and with six laps to go we tried."

Vos and Van Vleuten whittled down the gap to 32 seconds but Vos blew up with two laps still to go, leaving Van Vleuten alone to chase. "I thought for a while that I might get her back, but I had already done a lot of work in the chase. I had fired my bullets in the attacks with five and six laps to go and also because I had to keep accelerating afterwards. Anna was able to go a step further and then it was over for me."

After a quick podium ceremony and an elbow-bump with the other medalists, the new sporting gesture in the coronavirus pandemic, Van Vleuten praised the federation for pulling off the championships which had previously been cancelled. "There may have been some criticism, but if you want to organize national championships during the coronavirus and get it done, then you can only compliment it. It was really a good race. That's what the team leaders of our team also said, who watched it. And Boels-Dolmans just played it very well that they are very strong in terms of depth."

The women faced 124.1km of racing with 17 laps of the punchy 7.3km circuit that included 17 trips over the infamous landfill climb, the VAMberg. The climb starts with a short, excruciatingly steep cobbled pitch before a longer paved stretch. It only climbs 38m but, at an average of 9.4 per cent and a maximum of 22 per cent, it was a race for the climbers.

Van der Breggen played off an attack from Boels Dolmans teammate Jip van den Bos, who went clear in the opening laps, bridging across with Anouska Koster (Parkhotel Valkenburg) before the race was even half-way over.

As the trio forged two and a half minutes' gap over the chasing bunch, Van Vleuten and former champion Marianne Vos (CCC-Liv) took turns decimating the bunch but each time were chased down.

Finally, with four laps to go, Van Vleuten, Vos and European champion Amy Pieters went away again in pursuit of the leaders, slashing their gap to 42 seconds.

So dominant was the ride of the two leading trios that most of the chasing peloton was pulled from the 7.3km circuit as they risked being lapped.

The gap coming down, Van der Breggen took full responsibility for driving the pace while Van Vleuten paced Vos and seemed to let off the gas as they approached two laps to go - the gap stretching out from 27 to 32 seconds.

On the third to last trip up the climb, Koster and Vos lost contact on the cobbles, turning the race into an individual pursuit: the Boels Dolmans rider against the undefeated in 2020 world champion.

Van Vleuten had Koster in sight with 11km to go but kept her pace smooth. Meanwhile, Van der Breggen continued to add to her advantage, bringing it to one minute with one lap to go.

The world champion distanced Koster with 7km remaining but had left it too late to reel in Van der Breggen, who continued to add to her lead.

Finally, Van de Breggen would wear the blue, white and red jersey of national champion for the year for the first time in her elite career.