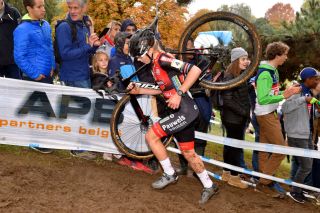 Laura Verdonschot (Pauwels Sauzen-Bingoal) took advantage of the absence of several of her major rivals to win the Zilvermeercross in Mol, Belgium on Sunday.

Verdonschot came from behind on the sandy course after a difficult start to win alone. Shirin van Anrooij was second and Inge van der Heijden (CCC) third.

World champion Sanne Cant, Annemarie Worst, Ceylin Alvarado and Yara Kastelijn were all absent as riders took a break and began a block of training before the intense December calendar of racing.  The long sections of sand around the Mol lake always characterise the Zilvermeercross races, and did again during a dry but cold race this year.

After a hectic start, Van Anrooij and Manon Bakker edged clear with Van der Heijden. Verdonschot was further back after her initial problems but soon powered back into contention. Verdonschot and Van der Heijden then swapped on and off at the front for much of the race.

Twenty minutes into the race, Van der Heijden surged clear and opened a 10-second gap. However, Verdonschot and Van Anrooij powered across to her and then Verdonschot went clear alone as the deep sand made the difference.