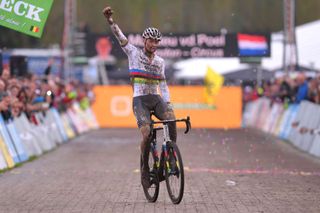 Just 24 hours after winning the European cyclo-cross title, Mathieu van der Poel (Corendon-Circus) was back in the saddle and dominating yet again at the Jaarmarktcross in Niel near Antwerp.

Van der Poel awoke at 5:00am to catch a flight from northern Italy to Belgium but shrugged off any fatigue to win alone. He let his rivals lead the race on the first lap but soon surged to the front before a key off-camber sector, opened up his unique power and bike skills to go clear alone.

Despite the wet and muddy conditions, Van der Poel continued to extend his lead during the nine laps, sliding down the descents, ploughing through the deep sand pit and running up the worst sections.

Van der Poel celebrated with his arms in the air a full 1:20 clear of second-placed Laurens Sweeck (Pauwels Sauzen–Bingoal). Thijs Aerts (Telenet Baloise Lions) stepped up to take third at 1:38.