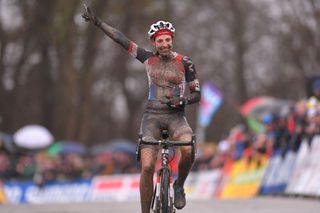 Lucinda Brand won on her cyclo-cross debut at the Jaarmarktcross in Niel, confirming the talents stretch from road racing to the toughest cyclo-cross races.

Brand was part of the Netherlands team that won the Team Relay world title in Yorkshire and also ride the individual time trial and road races. She took a short break and then began to prepare for the cyclo-cross season.

The Dutch national champion did not compete in the European championships on Sunday and with her big rivals not dashing back to Belgium, she was able to begin her time at Telenet Baloise Lions with a win in Niel. The race was held on Monday because November 11 is Rembrance Day and so a national holiday in Belgium.

Brand hit the front midway through the first lap and eventually distanced her rivals on the third lap, powering through the mud to open a significant gap on Katie Compton (Trek), with Marion Riberolle of France taking third after a mechanical problem slowed her good performance.

"That is a surprise for me. I didn't expect that I would be able to do so well right away," Brand said.

"It was a nice start and this course looked like it was made for me. It is nice to be able to switch from the road to the field. I had a cold last week, I had to stop training when it had only just begun. I'm still lacking something although I can perhaps still benefit from road racing form."

Compton was not too disappointed with third, looking forward to the upcoming World Cup races in Tabor on Sunday, and then Koksijde.

"I didn't feel great today but I rode an okay race and so I have to be happy. I didn’t have that kick and Lucinda was better today," Compton said sportingly.

"I keep getting second or third but hopefully I'll win one soon. Some days you feel good and tired on others. I've done some good training so hopefully that's why I'm tired, it's all in preparation for the World Cups in Tabor and Koksijde.