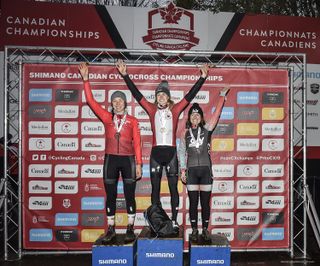 Maghalie Rochette (Specialized/Feedback Sports) mastered the conditions to defend her elite titles at the Canadian cyclo-cross Championships on Saturday, in Peterborough, Ontario.

The women's race came down to a battle between Rochette and last year's silver medallist, the mountain biker Jenn Jackson (AWI Racing p/b The Crank and Sprocket).  Last year, Rochette immediately rode Jackson off her wheel to win by 1:34, but in this year's race, she struggled to distance herself from her rival, and Jackson even gapped Rochette on the second lap.

Rochette finally opened a gap on the third lap and eventually won by 38 seconds, but she admitted that Jackson pushed her all race. Sandra Walter (LIV Cycling Canada) took third.

"It was a hard day today," said Rochette.  "I knew Jenn would come out firing today and she really did. She brought a solid battle which really brought the best out of me. I had to ride hard to shake her.  I stayed pretty calm [when she got a gap].  I've been working on that, so I let her go in front for a bit and used this opportunity to recover a bit. So I stayed calm, but I also realized that if I wanted to win, I had to do it from the front, so I quickly went back to the front and tried to put the pressure from there."