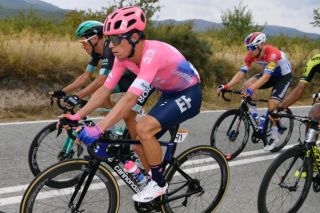 Valverde punches way back into contention at Vuelta a Espana

Rigoberto Urán (EF Education First) and Nicolas Roche (Team Sunweb) have abandoned the Vuelta a España after being involved in a massive crash with less than 90km left on stage 6. The extent of their injuries is unknown.

The Colombian finished seventh in this year's Tour de France and in the 2018 Vuelta a España. He has previously had to abandon the Tour in 2018 and the Vuelta in 2014.

It was a nightmare for EF Education First as they also lost Hugh Carthy, who had impressed on Wednesday's summit finish.

The team tweeted, "Rigoberto Urán and Hugh Carthy have abandoned the @lavuelta due to a large crash on stage 6. They are currently on their way to the hospital where they will receive further medical evaluation. Further updates announced in due course."

The crash saw several riders from other teams hit the deck, and Urán and Carthy weren't the only ones forced to leave the race. Roche, who led the race until Wednesday, was forced out after remounting and visiting the medical car.

CCC Team's Victor de la Parte, 13th overall at the start of the day, was the fourth rider to abandon in the immediate aftermath.