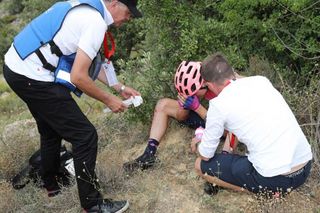 EF Education First suffered a knock-out blow to their Vuelta a España hopes after the squad were involved in a major crash halfway through stage 6.

Team leader Rigoberto Urán was one of the worst affected, with both the Colombian and one of the team’s best climbers, Hugh Carthy, forced out of the race.

Others who suffered badly in the crash were former race leader Nicolas Roche (Team Sunweb), and Victor de la Parte (CCC Team), both of whom abandoned.

"A Jumbo-Visma rider lost control on a very fast descent," EF Education First team director Juanma Garate told Spanish TV later during the stage, "and a good chunk of our team went down with him. Both Rigo and Hugh are in an ambulance right now, they’re badly hurt. We’ve no luck in this race."

Initial reports said that both Uran, lying sixth overall, and Carthy, who had been instrumental in shredding the field on stage 5, had suffered broken left collarbones. A team communiqué said they were headed to hospital for check-ups.

Urán had also crashed on stage 4, although the damage did not appear to be serious. Sergio Higuita, who also came down in the stage 6 crash, was able to continue.

As if that was not bad enough luck for the team, Tejay van Garderen had been in the break of the day when he went flying on a corner on a descent. Although able to remount and finish, the American was last on the stage, at the end of what had been a disastrous day for the squad.

"Personally, I wasn’t involved but about half the team went down. The race was ripping down this downhill and at this turn it was tighter than everybody expected," EF rider Lawson Craddock told reporters at the line.

"Really, it was a rough day for us. It’s frustrating to say the least but that’s bike racing. It’s still a long race. Rigo is out and we’re really disappointed, but we’re kind of trying to focus again and that’s a testament to the leadership of Juanma Garate, our director. and Mitch Docker, our road captain."

Higuita, who hit the deck, explained how the crash happened.

"We were going down off a climb, a Jumbo rider braked on a corner and his front wheel went from under him," the Colombian told reporters. "We all went over him, but Rigo was right at the bottom of the heap of riders who fell and his collarbone was broken.

"I just got some blows on my back, I don’t think it’s too bad, but it was a heck of a fight to get back in the bunch as the team car was looking after Rigo and Hugh."

Daniel Martinez, who must now assume greater responsibility in the team despite his youth, vowed he and his teammates would dust themselves off.

"It was a really dangerous moment because he fell, and then when all of us went over him there was a big drop on the side of the road," said the 23-year-old Colombian.

"We waited for them to get up, but Rigo was really in a bad way, Hugh wasn’t good and we’ve lost two men today. But we’ll fight on, we have to keep our heads high. That’s cycling."