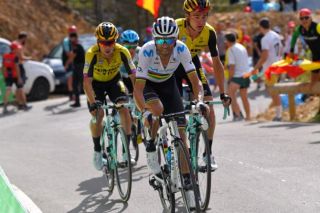 Valverde set to hunt stage victories at the Vuelta a Espana

Alejandro Valverde may be approaching 40, but the Movistar racer continues to deliver his trademark top-level performances at the Vuelta a España, moving up to fourth overall on the Alto de Javalambre with an aggressive performance.

On this occasion shortly after Astana and Team EF’s Hugh Carthy had shredded the field, Valverde blasted out of the pack of shrinking favourites on the upper slopes of the Javalambre summit finish on Wednesday.

Although he could not follow Miguel Ángel López when the Astana rider attacked to take the lead, Valverde rode steadily behind, with only Primož Roglič (Jumbo-Visma) able to match the Spaniard’s pace.

The two did well to lose only 12 seconds, pushing Valverde back up to fourth overall, whilst his teammate Nairo Quintana – whom Valverde insists is "still the leader" – remains in third, five seconds up on the veteran.

"'Superman' [López] was very fast, but I could keep going at my own pace, so I have to be satisfied with that," the reigning world champion told reporters on the line. "Roglič was a good ally today and we worked together to go to the top. I wanted to limit my losses on 'Superman'. It's been obvious he is a key rival ever since the race began."

After stage 2, it seemed clear that Nairo [Quintana] was the Spanish team's main option on the Vuelta a España, and Valverde was keen to play down the idea that he might be gaining ground as a GC option for Movistar ahead of Quintana. Indeed, the team's directeur sportifs said he would target stage victories. However, at the same time, he was adamant he still had his own chances to defend.

"Nairo is the leader, there's no doubt about that, we lost a little bit of time [with Quintana], but it's nothing important. You lose in a race like this when you lose five minutes."

However, Valverde also added that he had thought that Nairo was on his wheel, and even though he later discovered that wasn't the case, "I continued on at my own pace."

Quintana did not seem overly troubled by Valverde's move, simply telling Colombian reporters at the finish that he had "not been on a great day. My only option was to limit the gaps."

But Valverde's reemergence in the top four on GC will doubtless raise questions, once again, amongst the Spanish media as to whether he can win the race outright.

"I don't know," Valverde said afterwards, "I had the legs for today and I'm going to take it on the day by day. Nairo is very strong, too, and today was a climb that suited both of us."

But, it was clear, Javalambre finally ended up by suiting Valverde better – and Movistar, once again, have two general classification options at the Vuelta a España.