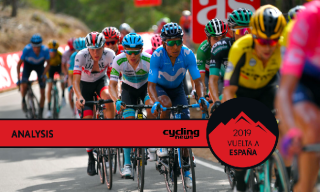 Valverde punches way back into contention at Vuelta a Espana

The Vuelta a España's first summit finish on Wednesday has seen Miguel Angel Lopez and his Astana team regain the upper hand in the GC battle, but it is far too soon and his lead is far too precarious for the Colombian to be called the definitive favourite.

So much has happened since the Vuelta a España kicked off that it feels far longer than five days since the riders rolled down the opening team time trial ramp in Torrevieja's salt mountains last Saturday.

But in fact, there are still seven of the race's eight summit finishes left to come, plus a major time trial. And even on rolling stages like Sunday's stage 2, which could have – maybe – ended in a reduced-bunch sprint, there was far more GC action than anticipated.

After five stages and a rasping attack on the race's summit finish of Javalambre, Lopez holds the red jersey by a slender margin of 14 seconds over Primoz Roglic (Jumbo-Visma).

Perhaps more importantly, his margin of 12 seconds on Roglic and Spanish veteran Alejandro Valverde (Movistar) gained in four kilometres on Javalambre was, by his admission, "not much" – particularly for an out-and-out climber like the Colombian on what was, in theory, very favourable terrain.

The GC pendulum could, in other words, swing back easily in favour of Roglic or the other overall contenders, and even if Thursday's grinding final third-category ascent to Ares de Maestrat hardly looks like an opportunity to ambush Lopez, the relentlessly difficult terrain through the sierras of Teruel and Valencia that precedes it could see some serious challenges or ambushes emerge.

Javalambre confirmed, too, that Primoz Roglic's injuries from stage 1 are not affecting his overall condition in the slightest. And if teammate Steven Kruijswijk's absence constitutes an important blow to Jumbo's chances at the same time, US climber Sepp Kuss appears to be hitting top mountain form in the nick of time.

The evidence from Javalambre, then, suggests that whilst he might not be able to match Lopez in the high mountains, Roglic and Jumbo-Visma can certainly play a strong defensive game. And that may well prove to be enough, at least for now.

Yet Lopez cannot afford to rest on his laurels. As Lopez himself pointed out, the time trial in Pau could see the Slovenian inflict some serious damage on all his GC rivals, meaning they have to take every opportunity available in the mountain stages to come.

Whilst Lopez and Roglic have emerged as the main GC men for now, it would be a serious error to say that the Vuelta has already boiled down to a two-way duel. Valverde's late attack on Javalambre both puts the Movistar man back in the GC game and could mean that the Spanish team have two cards to play in the overall battle – Quintana and El Bala. How effectively Movistar play those cards, and whether they risk cancelling each other out, as has happened in the past, is something their rivals will be watching closely.

Although Quintana, Valverde, Roglic and Lopez now have a 30-second cushion on previous race leader Nicolas Roche (Sunweb) – who turned in one of his best mountain performances in recent years at Javalambre to remain in fifth – and the rest of their GC rivals, the margins are still way too narrow to rule out the rest of the field. One big attack on the Pyrenean stage of Encamp could change the GC picture completely.

It's worth remembering, too, that we are only five days into a 21-day race, for all the 2019 Vuelta's pace has been non-stop, particularly compared to the sluggish first half of this year's Giro d'Italia. Yet as Lopez said, the climbers will have to take every opportunity they have to fend off Roglic. We can expect the sparks to keep flying then, at least for now.