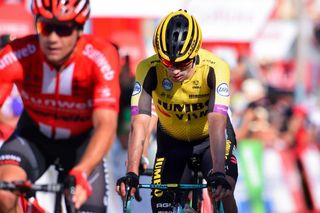 Primoz Roglic's bid to win his first Grand Tour remained firmly on track after the Vuelta a Espana's first summit finish, as the Slovenian star comfortably limited his losses on the climb to new race leader Miguel Angel Lopez (Astana).

After Astana and EF Education First upped the pace on the higher slopes of the Javalambre on stage 5, Roglic was able to respond to Alejandro Valverde's searing attack with five kilometres to go.

Roglic could not follow Lopez's acceleration that quickly followed but he only lost 12 seconds to the Colombian climber on the stage and he worked well with Valverde to limit the gaps.

His consistent performance in the mountains, ably supported by teammate Sepp Kuss and the rest of Jumbo-Visma, has allowed the Slovenian to gain four spots overall, ousting Nairo Quintana (Movistar) from second on GC.

Just 14 seconds behind Lopez in the overall standings, Roglic seemed satisfied with his performance, talking briefly to reporters after the finish after he put on warm weather gear and was given a whistle for the 11-kilometre ride back down the mountain to the Jumbo-Visma team bus.

"It wasn't too hard, and I'm happy to get through," Roglic said. "It's a good beginning, so we'll see.

"Sepp did a great ride and I even had to ask him to slow down a little. He's young but he did brilliantly. The whole team did well."

"I wasn't surprised by what Valverde did, he won the Vuelta ten years ago and he's still flying now. I think we all know he can do well.

"It's nice to be able to do that, a real confidence boost," Kuss, tackling his second Grand Tour of the season, told reporters afterwards. "It maybe took me a while to get the race rhythm in the first few stages, but today I felt good.

"I struggled a bit in the Giro, but I came out of it feeling in great shape, and I think it's helped in the second half of the season, in races like this."

The loss of Kruijswijk when he abandoned on stage 4 with an injured knee, Kuss admitted "is big. You might have thought he was tired after the Tour, but in fact Steve always gets stronger as the races go on. He would have been huge for us, but honestly, we could see how much his knee was hurting and you have to be realistic. It's a shame to lose him."

Kuss' overall analysis of the Vuelta's first major incursion into the mountains was that it was "interesting. Nobody really wanted to control it before the final ascent, but in the days to come, there's going to be a lot more hard climbing."

Roglic has turned in a solid performance, one which confirms his injuries of stage one are behind him and which makes him, for now at least, Lopez most dangerous rival. So even if there is a long way to go to Madrid, for the Slovenian and Jumbo-Visma, that can only be encouraging.