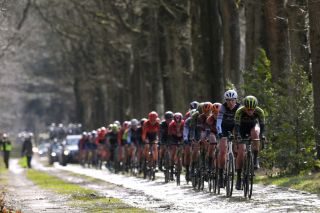 The UCI announced on Thursday it has increased the anti-doping requirements for the new UCI Women's WorldTeams - the top division for women. The eight teams in the division will contribute €10,000 to the Cycling Anti-Doping Foundation (CADF), an amount that will be matched by the UCI, allowing the number of riders in the Required Testing Pool (RTP) to increase.

Last season, there were only 29 riders in the RTP and 90 anti-doping controls taken, but the additional funds will allow that number to rise to 53 this year and on to 74 by 2022.

Riders in the RTP are required to file their whereabouts information to allow for random anti-doping controls and the tests carried out by the CADF can be combined with those conducted by the National Anti-Doping Organisations (NADOs).

The requirements are in addition to those of each riders' NADO testing and whereabouts requirements. The UCI regulations state that any licensed rider is subject to testing at any time.

Women's WorldTeams are required to submit provisional training camp and competition schedules, and the Continental Women's teams can be required to provide this information under the CADF intelligence strategy.

The news comes on the heels of two high profile doping cases in the women's peloton - that of Dutch cyclo-cross racer Denise Betsema, who was handed an off-season six-month ban for an 'unintentional' anabolic steroid positive after successfully arguing it was the result of cross-contamination at a pharmacy. Sofie de Vuyst has contacted Betsema's attorney in hopes of getting similarly light treatment for her anabolic steroid positive.

UCI President David Lappartient says the move is a "significant increase in resources for supporting the UCI Women's WorldTeams" and "an important new phase in the UCI's commitment to clean sport and the stance our Federation is taking in leading the fight against drug cheats. Safeguarding cycling's integrity and reputation has a cost but not a price."

There are currently 102 women registered on UCI Women's WorldTeams in the UCI's database and a total of 492 in the Women's Continental Team division.

The new requirements will set a minimum of three riders per WorldTeam in the RTP and, with the increase in the number of registered Women's WorldTeams planned over the next three years, the number of riders in the pool should continue to rise.

The UCI says it also plans for testing during the 21 different Women's WorldTour events over 46 days of racing, with blood tests conducted before and during races for the Biological Passport, testing during training camps and long-term storage of samples for retrospective testing.