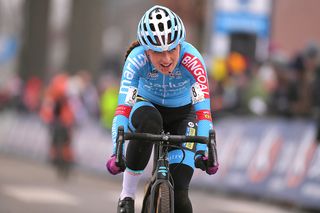 Denise Betsema has told the press that her positive test for an anabolic androgenic steroid last year was due to contaminated supplements and the fault of a Belgian pharmacist. However, her seemingly light back-dated six-month suspension issued from the UCI, which ended on October 4, has been received with anger and frustration by competitors within the sport.

Speaking at a press conference on Tuesday, Betsema was flanked by her lawyer Johnny Maeschalck. She maintained that she never intentionally used banned substances during her career as a cyclist. "I don't wish anyone this nightmare," she said.

"My world was upside down. I was assisted [in an attempt to prove her innocence] by doping expert Douwe de Boer and lawyer Johnny Maeschalck. I had to prove that I had never consciously taken doping. That's why I had all my dietary supplements examined."

Maeschalck said that they successfully demonstrated that "there was no intention to dope" and that the UCI accepted the defense on January 17, 2020.

"I don't want to turn Denise into a new Jean-Marc Bosman and try to undermine the system," Maeschalck said.

Betsema said she used a Belgian pharmacist to make her supplements because Belgian rules are strict and she wanted to reduce the risk of contamination.

Betsema secured 15 victories last season that included a UCI World Cup win in Koksijde. She then tested positive at the UCI Cyclo-cross World Cup round in Hoogerheide on January 27 and at the Superprestige round in Middelkerke on February 16. She was then provisionally suspended by the UCI.

The UCI announced its decision in Betsema’s case on Monday, stating that she was sanctioned with a back-dated six-month ban that started on April 5, 2019 and ended October 4, 2019.

The UCI anti-doping rules provide for reduced bans for unintentional anti-doping rule violations (10.2.1.1). For cases such as contaminated products, the UCI rules allow for punishment anywhere from a reprimand to two years suspension "depending on the Rider’s degree of Fault" (10.5.1.2).

Betsema is permitted to compete in cyclo-cross with immediate effect. She will rejoin her old team Marlux-Bingoal (now known as Pauwels Sauzen-Bingoal – Ed.) and will race at Kasteelcross on Saturday.

Cyclo-cross competitors have not taken lightly to the UCI’s decision to sanction Betsema with a shorter six-month suspension. Fifteen-time US national champion and former World Cup winner Katie Compton expressed anger and frustration over the decision.

"This is such bull shit, a rider tests positive TWICE for anabolic steroids & she gets a 6month off-season ban? ⁦@UCI_cycling lets clean athletes down yet again," she wrote on social media.

Katerina Nash, who accepted a role as president of the UCI Athletes' Commission in 2017, also expressed her disappointment in the decision. She criticised the UCI for not holding Betsema accountable for ingesting a banned substance, even if it was unintentional.

"The principle of strict liability in Anti-Doping is very clear. Intentional or unintentional means the same result - guilty! Athletes are 100% responsible for what goes in our body at all times. I'll always follow these rules and fight for #cleansport in all possible ways," she wrote on Twitter.

Retired cyclo-cross racer Ryan Trebon also took to Twitter to express his frustration and disappointment over the UCI's decision to suspend Betsema for six months in between cyclo-cross seasons when there are no competitions, and that her team welcomed her back to start competing this weekend.

"The fact that Denise Betsema tested positive twice at 2 different events and the give her a 6month basically off season suspension and then her team rehire her is an utter fucking joke and a slap in the face of every hard working, rule abiding athlete," Trebon wrote.

This is such bull shit, a rider tests positive TWICE for anabolic steroids & she gets a 6month off-season ban? ⁦@UCI_cycling⁩ lets clean athletes down yet again. Denise Betsema free to race as UCI announces back-dated six-month ban | Cyclingnews https://t.co/HZqBB44NrnJanuary 20, 2020