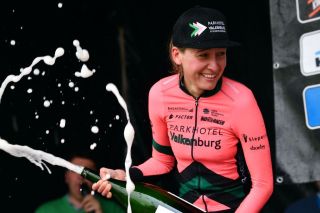 Sofie De Vuyst’s contract with Mitchelton-Scott has been suspended pending the results of an ongoing investigation surrounding her positive test for exogenous anabolic steroids, according to a statement from the team. The Belgian rider is currently awaiting the results of the B-sample that has been tested at her request.

"Due to an alleged infringement to the Anti-Doping Policy and Code of Conduct of the Team and pending results from an ongoing investigation, Sofie De Vuyst’s contract has been suspended and her name removed from UCI registration."

In September, Mitchelton-Scott announced that they had signed De Vuyst for the 2020 season. De Vuyst won Brabantse Pijl in April, along with the mountain classifications at Festival Elsy Jacobs in May and Lotto Belgium Tour in September. She was awarded the Flandrienne of the year prize for her 2019 road season.

De Vuyst returned a positive test for exogenous anabolic steroids following an out-of-competition control on September 18, 2019, the week prior to the World Championships. She admitted to her A-sample positive in November which led to a suspension by her former team Parkhotel Valkenburg.

She has pleaded her innocence and requested to have the B-sample tested in early December.