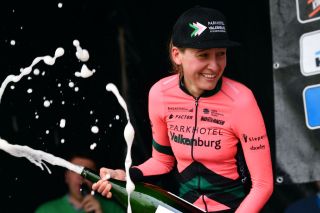 Sofie de Vuyst has admitted to failing an out-of competition doping control. Her Parkhotel Valkenburg team announced that it has suspended her pending analysis of the B-sample.

De Vuyst says she will try everything to clear her name, and regrets the news tarnishing the sport and her team.

"Cycling is a wonderful sport, unfortunately this message does not do the image of the sport any good. That also makes me very sad. That my current team is getting negative attention in this way, touches me personally. These things are therefore an extra motivation to do all of this. The sport and the team do not deserve this either."

"The management of the women's cycling team regrets to receive this news from one of their riders," a team statement read. "As a team we are therefore completely distanced from this possible offense.

"Pending the outcome of the B sample and the further course of the procedure, management decided, in accordance with the standards and values and the zero-tolerance policy of the team that Sofie De Vuyst, with which the contract will expire at the end of 2019, is suspended with immediate effect. Nonetheless, the team hopes that Sofie De Vuyst, who claims innocence, will soon be able to clear her name.

"The team regrets this case and will continue to work towards a safe, healthy and professional environment where cheating will never be given a place."

The 32-year-old Belgian was recently awarded the Flandrienne of the year prize for her 2019 road season that included a victory in Brabantse Pijl.

De Vuyst's doping control, taken out of competition on September 18, 2019, the week prior to the World Championships, reportedly showed evidence of exogenous anabolic steroids.