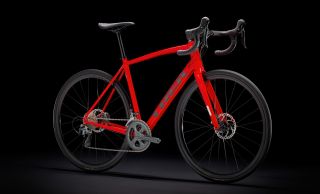 There's a new entry into the Trek road bikes range. The US-based bike manufacturer has revised its Domane range with a better value offering.

With the Domane AL Disc, product planners at Trek are delivering a host of contemporary cycling technologies, at a more attainable price point for novice road riders – or simply for those looking for the best budget road bike.

This most affordable Domane retains its aluminium construction but the tubes are now joined with much smoother weld profiles to create an overall frame aesthetic which is close in appearance to that of a carbon road bike.

Beyond the Domane AL Disc’s more fluid styling, Trek’s engineers and industrial designers have managed to add some of the desirable technology features present in the carbon-fibre Domane to their aluminium frame.

The new Domane AL has internally routed cabling, which actuates disc brakes and the frame now rolls on 12mm thru-axles at both the front and rear wheels. Its head tube is tapered, to allow greater surface contact area for the carbon fork’s steerer tube and Trek has shaped the frame with generous clearance for wider road tyres.

Although the new Domane AL Disc is assembled with 32mm rubber, those riders who wish to roll wider tyres will find adequate clearance for tyres up to 35mm in width.

Trek has opted for a short and steep geometry profile with its new Domane AL Disc models, clearly targeting these bikes at riders who prefer comfort instead of an overly committed aero riding position. As a point of reference, the size 56cm frame has only 377mm of reach.

Additional frame details include Bontrager’s Duotrap-S Bluetooth speed and cadence sensor, rear bike rack mounts and ability to carry three bottles – two in the main triangle and one mounted below the down tube.

There are a total of four derivatives – of which half are equipped with mechanical disc brakes and the more premium variants using hydraulic stopping power. All Domane AL Disc bikes roll tubeless road tyres.