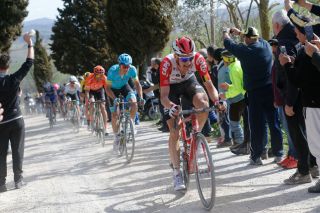 Belgian public-service broadcaster RTBF has published a provisional men's calendar for the post-COVID-19 men's professional cycling season – starting with Strade Bianche on August 1 – which it says the UCI has sent out to teams.

Despite the worldwide coronavirus crisis continuing and the risk of a second peak of cases in a few months time, professional cycling hopes to return in the late summer and autumn and teams and organisers are ready to race until late November.

While we already know that the Tour de France has been scheduled for August 29-September 20, the dates for the two other Grand Tours – the Giro d'Italia and the Vuelta a España – are still to be confirmed, although it had been suggested that they could take place in October and November, respectively.

The provisional calendar now proposes that the Giro d'Italia would start on the first weekend of October, while the Vuelta would start on November 1. Some of the Classics will be held at the same time, with others kicking off the new-look calendar if racing is allowed in some countries.

According to RTBF, after the reopening of the season with one-day Classic Strade Bianche on Saturday, August 1, Milan-San Remo would then take place a week later, on August 8.

As was already known, the UCI Road World Championships are set to keep their original dates of September 20-27, with the first day overlapping with the final day of the Tour de France, while the three Ardennes Classics – Flèche Wallonne, Liège-Bastogne-Liège and Amstel Gold – would be raced on September 30, October 4 and October 10, respectively.

The Flemish 'spring' Classics would then take place at the same time as the Giro d'Italia, with Gent-Wevelgem on October 11, the Tour of Flanders on October 18 and Paris-Roubaix on October 25. The Classics season would then draw to a close on October 31 with Il Lombardia, not too far removed from its originally planned 2020 date of October 10.

However, the director of sporting events for the province of Liège, Giovanni Bozzi, echoed everyone's sentiments when he reiterated that nothing was certain, and that there are still more important things going on right now rather than finalising when sports events will take place.

"But if we could really choose, we would choose early October, yes," Bozzi told RTBF.be with regards to Liège-Bastogne-Liège.

"At that time, we wouldn't be impacted by the construction of the Liège tram, and the weather wouldn't be as bad as in November.

"There'd also be the October Fair taking place in the city centre, which would have to be taken into account, but there are alternatives," he said, with RTBF suggesting that the race finish could be moved from the Boulevard d'Avroy to the Quay Mativa, where stage 2 of the 2017 Tour de France finished, and was won by Etixx-QuickStep's Marcel Kittel.

From November 1: Vuelta a España