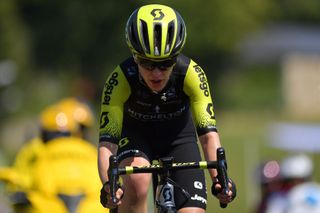 Amanda Spratt has taken the appropriate steps to ready herself for a possible evacuation from the bushfire crisis that has swept through areas surrounding Sydney, Australia. The Mitchelton-Scott rider, who is currently at home training in the Blue Mountains area for a fourth consecutive victory at the Santos Women’s Tour Down Under in January, told Cyclingnews that while there are no calls to evacuate, yet, she is packed and ready to leave at any moment.

"There are no evacuations yet, but we’ve packed suitcases and we are ready to leave at any moment if we have to," Spratt said. "The important thing is that everyone stays safe."

Australia has been fighting bushfires for several months due to hot and dry weather conditions. Last week temperatures hit a record average of 41 Celsius and an extreme heatwave and long-running drought have caused very dry conditions. Although the temperatures had begun to taper, they are expected to rise again over the weekend.

Since September, bushfires have killed at least nine people and destroyed hundreds of homes. It was reported that the fires have destroyed 37,000 square kilometres across five states including New South Wales and South Australia, having a destructive effect on the nation’s wildlife.

There are currently more than 100 fires burning in the state of New South Wales, and a reported 50 of those fires are not yet contained.

Spratt lives in the Blue Mountains located west of Sydney where a mega fire is threatening several towns. Spratt said that her area has not been evacuated but that there is a significant amount of smoke in the air that is preventing her from training on her home roads.

"I’ve been building up my training and base but I live up in the Blue Mountains and we have really bad fires here at the moment with a lot of smoke," Spratt said. "I have to juggle my training with that at the moment.

"I haven’t been able to train outside everyday because some days the smoke is too bad. They say that exercising in that is the equivalent to smoking 100 cigarettes, so I’ve had to drive to start my training in different places or just train indoors."

Mitchelton-Scott is an Australian-registered men’s and women’s WorldTour outfit and the team shared the donation pages set up for the NSW Rural Fire Service and the CFS Foundation, to help support volunteer and emergency firefighters during the bushfire crisis.

Heartbreaking 💔. Thanks to the thousands of emergency service workers and volunteers for doing all that they do. Heroes. Stay safe everyone. https://t.co/odrrVS9zceDecember 21, 2019

Australia is currently in the middle of a bushfire crisis.Whilst we thank all of the firefighters & volunteers on the frontline, we can also do our part... Donation options:NSW RFS: https://t.co/3Iu8NFsrDVSA CFS: https://t.co/XJpIcaftkopic.twitter.com/ESborIoU3vDecember 23, 2019