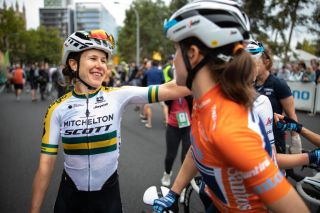 Amanda Spratt (Mitchelton-Scott) rolled across the stage 4 finish line, having lost the Santos Women's Tour Down Under for the first time in four years, but sought out Ruth Winder (Trek-Segafredo) to give her a congratulatory hug for sealing the overall victory. It was an example of being humble in victory and gracious in defeat.

Winder ended that winning streak, both rider and team, in what was a game of seconds, finishing five seconds ahead of Liane Lippert (Sunweb) and six seconds ahead of Spratt, who finished third.

"Of course, I came here to win but I’m really proud of the third place. My reign at the Tour Down Under had to end at some point," Spratt said.

Spratt came into the four-day race prepared to win a fourth consecutive title, and the odds were in her favour to do so. The route did not include a mountaintop finish this year but the stages were tough and unpredictable, which also suited Spratt.

Spratt won the second stage into Birdwood where she took the overall leader's jersey, and she looked set to continue that success through the final two days.

However, Winder stormed to victory on stage 3 in Stirling and moved into the overall lead, bumping Spratt down into third place.

The race ended with a criterium in downtown Adelaide where there were a total of 19 bonus seconds up for grabs, but neither Spratt nor Mitchelton-Scott were able to surpass the American champion, who ended up securing her first overall title in Australia's marquee stage race.

"I can't fault the team this week; they all rode really well. There wasn't much more that we could have changed – we were just beaten by a stronger rider, especially on yesterday's stage [stage 3]," Spratt said.

"It was a different Tour this year, as it all came down to bonus seconds. That made it quite exciting, and it put me out of my comfort zone today, too."

Spratt will compete at the Women's WorldTour Cadel Evans Great Ocean Road Race on February 2 before heading back over to Europe.

She is focused on making the Australian selection for the Tokyo Olympic Games in July, where she is a favourite to lead the team to a gold medal. She plans on putting together a similar race programme as last year, however, with a focus on the Ardennes Classics, the Giro Rosa, and then the Olympic Games and the World Championships.

"My season plan will be similar to the last two years, in terms of getting those natural flow and peaks in my season," Spratt told Cyclingnews in an interview during the off-season.

"It will be similar in terms of being good in Australia, but not in peak condition. I'll look at the Ardennes again and then work up to the Giro Rosa and Olympics. I want to be good in that period.