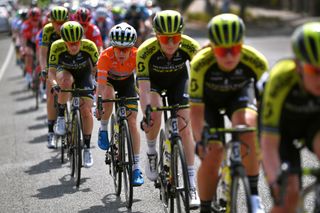 Amanda Spratt’s chances of winning a fourth consecutive title at the Santos Women’s Tour Down Under are slipping away as she heads into Sunday’s final criterium in Adelaide with a seven-second deficit to overall leader Ruth Winder (Trek-Segafredo). The Australian said she would be disappointed not to win the race again.

"Of course, there’s always disappointment, you always come here to win the overall, but that’s bike racing, you can’t always win and I’m still really proud of the way the team has ridden," Spratt said.

Mitchelton-Scott have won every edition of the race, beginning with Katrin Garfoot in the inaugural UCI Women's Tour Down Under in 2016. Spratt has won the overall titles in the three subsequent editions (2017-2019), and was preparing to win a fourth title on Sunday.

But, as the race heads into the final criterium, it's looking more and more likely that Winder and Trek-Segafredo will take the top honours this year.

Spratt took the overall lead of the four-day Women’s Tour Down under following her stage 2 victory in Birdwood. She led the overall classification by four seconds over Winder and five seconds over Liane Lippert (Sunweb) heading into stage 3’s 109.1km race from Naire to Stirling.

Spratt then lost the leader’s ochre jersey to Winder after the US national champion won stage 3’s uphill sprint and took a 10-second time bonus and moved into the overall lead.

"Tough day out," Spratt said in a post on Twitter. "Proud of the way the team rode fighting to keep the Ochre Jersey but my legs just didn’t have enough in the end. Of course I’m really disappointed I couldn’t keep it for my team but big kudos to [Ruth Winder] and [Trek-Segafredo] for the classy win."

The Women's Tour Down Under will conclude on stage 4 with a 42.5km circuit race in Adelaide. The peloton will race on a 1.7km circuit through Adelaide's centre, where three intermediate sprints will be held on laps 6, 12 and 18. In total, there are 19 seconds in time bonuses up for grabs.

Winder will start the final stage seven seconds ahead of both runner-up Lippert and third-placed Spratt.

Anything can happen on the final day, but Spratt’s chances of securing a fourth title seem less likely given that there are many of the world’s top sprinters on the line who will be aiming for a bunch sprint in Adelaide.

Tough day out. Proud of the way the team rode fighting to keep the Ochre Jersey but my legs just didn’t have enough in the end. Of course I’m really disappointed I couldn’t keep it for my team but big kudos to @RuthWinder and @TrekSegafredo for the classy win. https://t.co/ALDAq2lMHhJanuary 18, 2020