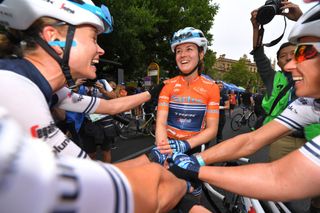 Ruth Winder (Trek-Segafredo) kicked off the season in the best possible way winning the overall title at the Santos Women's Tour Down Under on Sunday in Adelaide. The American champion said the victory has given her a boost of confidence in her attempt to make the US team selection for the 2020 Tokyo Olympic Games.

"Obviously it's an Olympic year and hopefully I can make the Olympic team," Winder said at the stage 4 finish line where she was crowned the winner of the sixth edition of the Women's Tour Down Under. "I hope that this is a good step in that direction, but we have really strong women in the US, so it's going to be a hard decision to make that team with four riders."

The UCI announced the quotas number of athletes that each National Olympic Committee has qualified for road events during the Olympic Games in Tokyo. While the men's race will field 130 riders, the women's race will field 67 athletes, whereby nations Australia, Germany, Italy, Netherlands and the United States with have the most riders per team. Each of these nations secured a total of four athletes.

The elite women's 137km road race will be held on July 26, also starting from Musashinonomori Park and ending at the Fuji International Speedway. The women's course will not go over Mt. Fuji, as the men's course will, but will include climbs over Donushi Road and Kagosaka Pass, and total 2,692 metres of climbing.

Winder has proven herself as an all-round, versatile rider who does will on circuit-style courses and hilly terrain.

She won the elite women's title at the USA Cycling Road Championships last year and is one of the nation's top-ranked riders in the world. She will likely form a race programme with her Trek-Segafredo team that builds toward a start in Tokyo.

The Olympic Games won't be her only focus this year. She indicated that she would like to perform well during the spring Classics that start in Europe next month at Omloop Het Nieuwsblad, continues on to Strade Bianche in March, and concludes with the Ardennes Classics; Amstel Gold Race, Flèche Wallonne and Liège-Bastogne-Liège in April.

"I'm really focusing on the Ardennes," Winder said. "I would really like a good result. I got my best spring Classic finished was 11th at Strade Bianche last year. So trying to improve on that, too."

At the Women's Tour Down Under, Winder went into the race as one of the favourites but all eyes were on Amanda Spratt (Mitchelton-Scott) to win a fourth consecutive title. The Australian road champion has won the previous three editions (2017-2019) while her former teammate Katrin Garfoot won the inaugural edition in 2016.

Spratt won the second stage of the four-day race into Bridwood where she took the overall leader's jersey. However, Winder took the jersey off Spratt's back the following day after winning the third stage in Stirling. Trek-Segafredo worked hard during the stage 4 criterium to keep a decisive breakaway in check and deliver Winder to the overall victory.

Winder won the race by five seconds over runner-up Liane Lippert (Sunweb) and there was an additional second to Spratt, who finished third place.

"Spratt's an amazing competitor and I think that [Mitchelton-Scott] put up a really good race," Winder said. "This year, I managed to pull away with the victory. But I wouldn't say it makes my victory feel any different knowing that Spratt won the last three.

"I think definitely the finish and Stirling was pretty special to me. And I think just to win a stage was really, really cool. And it gives the team, so much confidence and happiness, and the way that we raced together as a team that day was special.

"[The overall win] is definitely a little bit of a surprise. Colorado winters have been pretty cold this year and so it's been pretty cool to see that I can [be competitive with the Australian riders]."