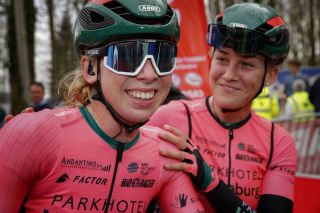 The women's world-number-one-ranked rider, Lorena Wiebes, has responded to rumours that she is attempting to annul the final year of her contract with Parkhotel Valkenburg in order to change teams for 2020.

Dutch-speaking website Wielerverhaal.com had published an article stating that Wiebes' management team were trying to negotiate a way for the 20-year-old Dutch rider to get out of her contract with her Dutch team a year early, with interest having been expressed by Trek-Segafredo, CCC-Liv and Sunweb. It said that the sprinter was keen to take the next step in her career.

In a statement published on Twitter on Tuesday, Wiebes neither confirmed nor denied the rumour, but said that she wanted to "correct one thing", referring to the fact that the original story said that she wasn't able to count on the assistance of her teammates in the final sprints at races.

"I have always been grateful to my teammates (and staff) and they have always done everything to help me in the races as good as possible," she wrote.

"It is not surprising that I often had to do it alone in the final, because Parkhotel Valkenburg is a development team and I could not expect anything more from the girls either.

"It is very unfortunate it had to come to this situation between me and Parkhotel Valkenburg," Wiebes also wrote, suggesting that negotiations were still ongoing, with the team apparently keen to hold on to their star rider, who signed a three-year contract with them ahead of the 2018 season.

"Looking forward to next season," added Wiebes, without any hints of where that might yet be. "I think the pressure on my teammates will only get higher after the success of 2019 and the focus of developing young talents will get lost in the pressure of getting results."