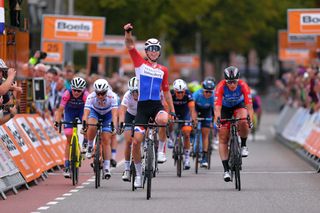 The women's world-number-one-ranked rider, Lorena Wiebes, has apparently had offers for the 2020 season from three of the world's biggest teams, and is therefore looking for a way out of her final, contracted season with her current Parkhotel Valkenburg team, according to a report on cycling website Wielerverhaal.com.

Wiebes has had an outstanding 2019 season, with the sprinter racking up 15 wins, which have included all three stages and the overall classification at the Tour of Chongming Island, the RideLondon Classique, two stages at the Boels Ladies Tour and the Dutch road race championships.

The Dutch rider is now looking to make the next step in her career, but despite interest from CCC-Liv, Sunweb and Trek-Segafredo, according to the Dutch-language website, her Parkhotel Valkenburg team are hoping to hang on to her next year, with Wiebes having signed a three-year contract with the Dutch team ahead of the 2018 season.

The 20-year-old has apparently not indicated any kind of preference for any of the interested teams, and is instead concentrating on seeing if she and her management team can come to an agreement to extricate her from her current contract.