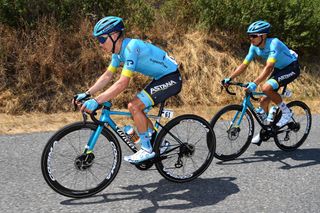 Miguel Ángel López’s first Tour de France appearance had been earmarked since last winter, but Harold Tejada, the other Colombian debutant in Astana’s line-up, was a later addition to the roster, securing his selection thanks to a sparkling series of displays since the cycling season resumed in early August.

The 23-year-old performed strongly in support of Aleksandr Vlasov at the Route d’Occitanie and he was to the fore again two days later at the Mont Ventoux Dénivelé Challenge, where he helped Vlasov to victory and claimed 6th place for himself.

Tejada continued in the same tenor in Italy a week later, with fine cameos at Il Lombardia and the Giro dell’Emilia, where Astana again claimed victory through Jakob Fuglsang and Vlasov, respectively.

López leads a strong Astana squad at the Tour that includes Gorka and Ion Izagirre, Omar Fraile and Luis León Sánchez, but his most valuable mountain domestique might yet prove to be the neo-professional from Pitalito in south-western Colombia.

“Harold is in his first year as a professional, he joined us at Astana this year. We’ve already seen that he obviously has great talent and can be a great rider,” López said in a short video conference ahead of the Tour on Wednesday.

“In the few races we’ve been able to have this year, he’s been with me for most of the time, and he’s been very good. I certainly think that, in a few years, he’s going to be a big champion. He’s at this Tour to work calmly and maybe to be there in some key moments.”

Tejada raced for the Medellin Continental team in 2019, where his teammates included Óscar Sevilla and Fabio Duarte. He began the campaign with victories in the under-23 road race and time trial at the Colombian Championships, and he had already agreed a move to the WorldTour with Astana by the time he claimed an Alpine victory at La Giettaz in the Tour de l’Avenir.

“I’m very happy with this selection for the Tour de France, it really is a dream come true,” Tejada said earlier this week. “I wasn’t expecting it, but my work, sacrifice and results meant I can make my debut in a Grand Tour. I’ll give 100 per cent to support my team of course to Miguel Ángel López in the mountains. We’ll see day by day.”

López’s Tour debut arrives in his sixth season as a professional, though he does not lack in experience in three-week races. He placed third overall at both the Giro d’Italia and the Vuelta a España in 2018, though he struggled to make the same impact in each race a year ago, placing 7th in Italy and 5th in Spain.

The 26-year-old’s lone race before the coronavirus pandemic interrupted the season was the Volta ao Algarve in February, where he won a stage atop the Alto do Malhão. He delivered a low-key performance on his return to action at the Route d’Occitanie but showed firmer signs of form at the Critérium du Dauphiné, where he placed 5th overall.

After winning Il Lombardia, Jakob Fuglsang denied suggestions that he might be drafted in to ride the Tour de France, and the Dane will – as planned since the beginning of the season – lead Astana at the Giro.

“Looking at the level we have had in the Dauphiné, we feel that we were good considering the rivals,” López said earlier this week, according to Win Sports. “A lot has happened in that last race due to accidents, but for now we are calm because we are healthy, and we are in perfect condition.”

The Astana team for the Tour also includes Hugo Houle, who tested positive for COVID-19 ahead of Il Lombardia. The Canadian told Cyclingnews that he has since had two negative PCR tests and a negative antigen test. He also underwent a stress test, electrocardiogram and VO2 max testing to rule out any damage to the heart muscle.

All riders on the Tour must return negative PCR tests in order to compete. ASO have stated that teams will be excluded from the race if two riders or staff members test positive for COVID-19 within a seven-day period.

“I think it’s quite a delicate situation, it’s not at all agreeable, but for the good of our health and to continue cycling, it’s good to have these protocols,” López said on Wednesday of his pre-Tour PCR test. “We don’t have any alternative, we have to learn to live with this reality.”