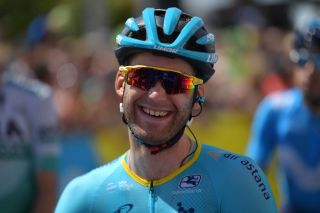 Astana's Hugo Houle is out of action for an unknown period of time after testing positive for the novel coronavirus SARS-CoV-2, although he has no symptoms of COVID-19. The Canadian is still going ahead with plans to race Tirreno-Adriatico next month and the Giro d'Italia in hopes that re-tests will come back negative, according to the Quebec news outlet LaPresse.

According to the Astana team, Houle underwent another test this week and expects the results to arrive on Friday.

The 29-year-old is the third case of the virus in the pro peloton since the rescheduled season began in late July. Israel Start-Up Nation's Omer Goldstein came back positive once, leading to him and teammates Itamar Einhorn and Alex Dowsett being pulled from the Vuelta a Burgos only to have all of them come back negative in subsequent tests.

Sylvan Dillier of the AG2R La Mondiale team was a late withdrawal from Strade Bianche after a final COVID-19 coronavirus test before the race resulted positive.

As part of the UCI's medical protocol, riders and team staff in the so-called team bubble, have to undergo regular COVID-19 tests to try to catch any cases.

Houle previously passed two COVID-19 tests before the Tour de Pologne, but last week he returned a positive test. Houle said he has no idea how he could have picked up the virus, saying he uses hand sanitizer, wears a mask when not on the bike, and washes his hands frequently.

"It surely happened in transport or at the hotel," Houle told Lapresse. Currently in quarantine in his apartment in Monaco, he speculates it might have come from the shared dining facilities at the race, which concluded on August 9. "At the buffet, you are not immune to a cook having it and not feeling it, like me. Fork, knife, you put your mouth on it, I don't know."

Houle is the only rider from his team to test positive for the virus. His roommate at the Tour de Pologne, Spaniard Ion Izagirre and Jakob Fuglsang both came back negative. Houle was due to support Fuglsang at Il Lombardia but was replaced in the lineup by Davide Martinelli.

Houle watched the race from his sofa instead, saying he was happy for Fuglsang for taking the victory. "I'm happy for him, I knew he had it in mind for a long time. It was nice to do with [Aleksandr] Vlasov who finished third. Obviously I would have liked to be there, but I'm not feeling sorry for myself."

Four days after testing positive Houle says he still has no symptoms and if he wasn't a pro cyclist and required to have the test before Lombardia, he never would have known.

"I would just have gone on with my life normally. I am not unusually tired. I have no fever, no cough, no pain in my lungs or hips, no loss of appetite.

"It is not a disaster in itself. I have time to rebuild the form. If the next test is negative I expect to be able to ride outside on Thursday," he said.

If he tests negative his next race will be the Bretagne Classic Ouest-France next week, followed by the Tour Poitou-Charentes (August 27 to 30).