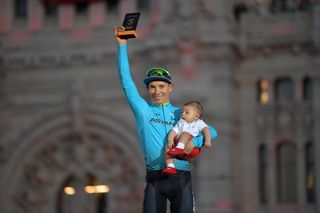 A week after a story in L'Equipe linked Grand Tour hopeful Miguel Angel López to Bora-Hansgrohe, the Colombian denied a move away from Astana in a press conference on Zoom on Thursday night.

López has been training in his home country since racing stopped in March after a promising start in the Volta ao Algarve, where he finished third overall, and confirmed he will make his debut in the Tour de France when racing resumes.

López said he hasn't been worrying yet about his future contract or leaving Astana, according to AS Colombia. "I just want to get back to the calendar, race and whatever happens," Lopez said. "The negotiations - if there are teams that have an interest in me - that's in the background and we'll have to wait. In the end, I don't think that's important. If it happens it will have to happen but not now."

Vinokourov: Astana will fold if we don't race again in 2020

He confirmed that professionals in Colombia will be able to leave the country mid-July despite the government extending a halt on international flights. Cyclingnews understands that a charter flight has been secured for the various Colombian pro cyclists to travel to Europe. López is due to start back to racing at the Criterium du Dauphiné on August 12-16 before making his Tour de France debut.

However, he confessed that he is still trepidatious about leaving home and going to race. "it's scary to come into contact with other people. At this moment there is no contact with anyone and it is scary to go and be around more people. It's a situation that has to be taken seriously," he said.

For the past month, he has been able to train outside and has been following all of the workouts the team trainers have sent, trusting them to get him ready for a steep entry to the peak of the revised 2020 road season. Living at altitude, he says, has helped.

Coming into major races, there will be a lot of unknowns. "In previous years you knew more or less how many days of racing your rivals had, what their performances were like, you analysed how fit they were, if they were missing, but this is going to be something very different. There won't be any prior competitions, it's like a game of waiting for the end.

"It will be a big surprise because that analysis will be impossible. It will be very strange. You just have to get used to the idea of that, trust the preparation he's got in his legs and that's what it's going to be worth in the end."

Even before quarantine, López has added more time on his time trial bike - perfecting his position and spending more time on the time trial bike in training. The effort showed in the Volta ao Algarve. After winning on the short, sharp Alto do Malhão he was just one second off the race lead, although he ended up losing 38 seconds to Remco Evenepoel in the individual time trial, but jumped one spot into third.

"I was able to start in the Algarve on the right foot. I won a stage with a very good finish and that was not my speciality, but I worked on those finishes."

The stage 20 time trial on La Planche des Belles Filles will be a key stage in the Tour de France, and López hopes all the work will pay off. "This is my big debut so whatever I do can be positive for me because it's a new race and the idea is to go and debut as a leader but without pressure because I don't know about the race and wait to see what happens at the end."