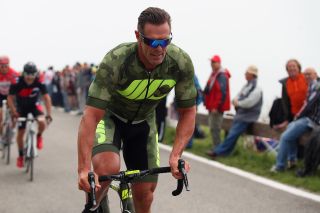 Mario Cipollini has revealed that he suffers from a serious heart condition and had to undergo surgery, making his health issues public in the hope that other people can better understand heart problems cyclists may face.

Cipollini underwent heart surgery for five hours in late October to treat a myocardial bridge - a condition where the heart muscle grows around the coronary artery and constricts blood flow. He also had an ablation in his right ventricle to resolve an arrhythmia and a biopsy that confirmed he had suffered from a viral infection that affected his heart and caused myocarditis or inflammation of the heart tissue.

Cipollini went for a check-up with former Liquigas team doctor Roberto Corsetti after sensing a problem when out riding. Corsetti confirmed that Cipollini could have died without a full diagnosis and treatment. He must now wait several months to find out if he will make a full recovery.

"I'm riding into a head wind at the moment but I'm used to suffering," Cipollini told La Gazzetta dello Sport in a major interview.

"It was strange to be diagnosed with a heart problem because as an athlete you feel healthy, strong and in perfect health. That wasn't the case. I felt something wasn't right when I pushed at 500 watts on a climb, I felt blocked.

"I was lucky to know Dr. Corsetti because some people don't have the same support. It also made me think that during my career I perhaps pushed my heart way too much and that I've now discovered I've got genetic problems that limited me."

History will be the judge of Operacion Puerto links, says Cipollini

Cipollini turns up at the Giro d'Italia

Cipollini's professional career and personal life have been in the headlines in the years since his retirement in 2008.

In 2013, he was implicated in the Operación Puerto doping investigation by La Gazzetta dello Sport after the Italian sports newspaper published alleged evidence of Cipollini's links to Dr. Eufemiano Fuentes and claimed that he had used EPO and undergone a series of blood transfusions during the 2002 season, during which he won Milan-San Remo, Gent-Wevelgem and the World Championships in Zolder.

Cipollini threatened legal action against La Gazzetta dello Sport but the dispute appears to be over and the paper has recently carried a number of interviews with him. Operación Puerto has since been formally closed, with the many of the athletes involved never identified, even after WADA performed DNA testing on the evidence, due to the statute of limitations.

Cipollini is on trial in his hometown of Lucca for threatening his former wife Sabrina Landucci. She recently claimed in court that Cipollini physically abused her and pointed a gun at her head. Cipollini has yet to give evidence and so refused to comment on the trial.

"No comment. It wouldn't be right for me to speak about it before I speak to the judge," Cipollini told La Gazzetta dello Sport.

Instead, he spoke at length about his heart problems and the need for preventative check-ups.

"It's a serious problem and can have dire consequences. The doctors told me my case was due to a virus. There's no direct cure; I just need to rest. I feel good after the surgery and can only hope I get the okay in January," he said offering advice to anyone with concerns about their heart.

"Early diagnosis is important, as is the need to look after yourself and not ignore things. I hope me revealing my heart problems can help others. Medical check-ups to obtain a [racing] licence aren’t very detailed, I've always done them and they never revealed anything. Fortunately, technology helps a lot these days and we can perhaps save some of the lives that are lost to what seems a fatality.

"I'm in the middle of a personal battle but I'm going to win this one, too. I'm 52 and there are still things I want to do in my life. I've decided to investigate every detail of my problem for the good of my daughters. Knowing that I've got a congenital problem could save them in the future."