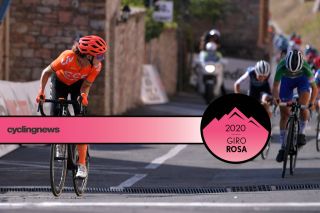 Marianne Vos on her way to winning stage 3 at the Giro Rosa in Assisi (Image credit: Getty Images)

After some confusion as to exactly what the finish of today’s stage of the Giro Rosa would look like, the riders faced a steep climb up to the walled town of Assisi, where Marianne Vos of CCC-Liv took the win. Even without the changes it was clear that this parcours was well-suited to the punchy Dutchwoman, with a short and steep uphill sprint to the line.

"Today was very hard," Vos said in a post-race interview. "Not only for me, but everyone was struggling, and then you still had to try to make a sprint. I saw the finish, and I went. I nearly collapsed on the finish but it was good enough."

The peloton reached the foot of the climb all together when Elisa Longo Borghini (Trek-Segafredo) attacked taking Cecilie Uttrup Ludwig (FDJ Nouvelle-Aquitaine Futuroscope) and Vos with her. After Longo Borghini faded, the battle for the stage win was between Uttrup Ludwig and Vos, with the Dutch rider, who is rumoured to have signed a two-year deal with the new Jumbo-Visma women’s team, proving to pack the biggest punch on the day.

Positioning on the narrow approach to the final climb was crucial to the outcome of the race, and Vos’ CCC-Liv team ensured the former world champion was well placed coming into Assisi.

Stage 3 looked to have the potential to split the race up early on with a number of climbs coming in the first few kilometres. However, the peloton stayed together for the majority of the day - which played into the hands of CCC-Liv’s tactics.

"We had a plan to try and conserve energy and give it all on the final climb and do a great lead-out with the team and that all worked out,” said Vos.

Vos’ win today means that she has now moved up five places on GC, currently sitting in 10th overall and 4:53 back from Annemiek Van Vleuten.

CCC-Liv also have South African national champion Ashleigh Moolman-Pasio in 6th overall and 3:58 down. Of the team’s GC ambitions for herself or Moolman-Pasio, Vos said that she believes her teammate will improve over the coming stages.

"She’s good and I think she will grow even more better into this race and tomorrow will be a tough day again so, it’s not that we look that far ahead, we’ll just look to tomorrow and try to make the most of that again and we’ll see,” Vos said.

Tomorrow, riders face a tough 170km point-to-point stage 4 from Assisi to Tivoli, with just one third-category GPM and another steep uphill finish it could be yet another day for the likes of Vos.