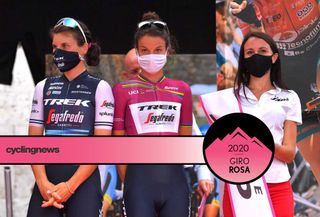 Organisers of the 2020 Giro Rosa confirmed that there will be no live broadcast of the nine-day race held from September 11-19. They have announced that a post-race broadcast on RAI Sport will be offered instead, a decision that goes against the UCI's mandated 45 minutes of live television requirement to be part of the Women's WorldTour.

Frustration mounted Friday when cycling fans were offered no live television or streaming options to watch the opening team time trial in Grosseto, which was won by Trek-Segafredo and Italian Elisa Longo Borghini took the first maglia rosa.

Professional cycling fans have been watching a complete live coverage package of the Tour de France, held from August 29-September 20, and Tirreno-Adriatico in Italy, held from September 7-14, but that will not be the case for the Giro Rosa. Organisers confirmed that RAI Sport will provide a 10-minute highlights package at 6 p.m. CET followed by a 50-minute post-race broadcast at 7 p.m. CET.

The UCI announced last year that organisers which wished to be part of the Women's WorldTour must provide 45 minutes of live television, in addition to the post-race highlight packages and broadcast reels. The UCI mandated this to help raise the level of viewership and professionalism of the races and to meet the fast-growing demands of fans interested in watching the top-tier women's cycling on live platforms.

The Giro Rosa is a long-running women's race celebrating its 31st anniversary this year. From a historical context, it is the biggest and most prestigious women's race in the world and the only women's Grand Tour of the season that normally covers 10 days of racing and includes iconic mountain passes. However, it has also been one of the toughest of the Women's WorldTour races to follow due to limited live broadcast coverage.

The UCI confirmed to Cyclingnews earlier this month that there would not be the mandatory 45 minutes of live television coverage at the Giro Rosa but that the race would be aired for 20 minutes on a live TV schedule during each stage of the Tour de France.

In previous years, RAI Sport has provided short live segments of the race during the full footage of the Tour de France, followed by a post-race highlights package. It was announced in March that Pulse Media Group (PMG Sport) reached an agreement with Athletic Sports Group (ASG) for the media rights to the Giro Rosa.

Cyclingnews reached out to race organisers regarding their plans for live television coverage during this year's nine-day race, or reasons for not offering live television, but they did not respond before the publishing of this story. ASG confirmed to Cyclingnews that the race would only be offered as a "near-live" programme.

"The Giro Rosa near-live is available worldwide," an ASG spokesperson said. "This year it is available in an edited hour [-long] program provided directly after the race."

Despite frustration at the lack of live television coverage, cycling fans tuned in nonetheless, reading text play-by-plays offered on social media channels, such as Twitter, from the UCI's main Women's WorldTour account (@UCI_WWT) and the Giro Rosa (@GiroRosaIccrea).

There are also a range of post-race broadcasts (delivered "as-live") along with additional video content available on Flobikes, SBS, Eurosport and GCN, that will cover all the action with commentary following each stage.

Cyclingnews understands that the UCI has been trying to reach the organisers in order to confirm their live TV plans after they apparently committed to live coverage. It remains to be seen if there will be live television of the Giro Rosa during later stages. We'll have to tune in to find out.

The Giro Rosa was originally scheduled to take place from June 26 to July 5, but organisers were forced to reschedule the race for September 11-19, and reduce it by one stage to nine days, as part of the post-COVID-19 revised Women's WorldTour calendar.

Organisers revealed the full route details that include visits to regions of Tuscany, Umbria, Lazio, Campania and Puglia. The race will include a Strade Bianche-style route along the white gravel road of Tuscany on Saturday's stage 2, and then include four hilltop finishes on stage 3 in Assisi, stage 4 in Tivoli, stage 8 at San Marco La Catola and the finale stage 9 at Motta Montecorvino.

Overall, it's been a difficult year for Italy, which was heavily affected by the COVID-19 coronavirus pandemic during the spring. Race organizer Giuseppe Rivolta said he didn't want to give up on the race and was committed to making it happen later in the year.

"Sport in general and cycling, in particular, have always been synonymous with self-denial, dedication to a cause, commitment, suffering and love," he said at that time. "The difficult period that our society is going through is also being faced thanks to these values. This is why we did not want to abandon the Giro Rosa, we did not want to give up, we fought and made sacrifices so that the magic of the peloton on the roads can be repeated again this year, albeit with a different place on the calendar."