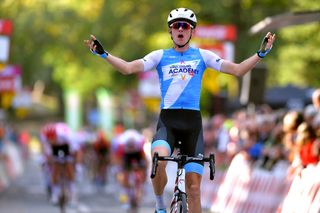 Israel Cycling Academy have completed their takeover of the Katusha-Alpecin team and are now awaiting confirmation from the UCI that they have secured a place in the 2020 WorldTour.

The Israeli team bought out the existing Katusha management company, and so rider contracts for 2020 will be valid and the new-look team can secure one of the 20 places in the next three-year phase of the UCI WorldTour.

Israel Cycling Academy's billionaire backer Sylvan Adams has been keen to step up to WorldTour level and ride the Tour de France as soon as possible, while the Katusha-Alpecin team’s future has been in doubt since the summer when Alpecin and bike sponsor Canyon announced they were ending their backing.

Negotiations between the two teams had been ongoing for several weeks, with the value of Katusha-Alpecin's place in the 2020-2022 WorldTour apparently a final obstacle to resolve.

A deal was struck over the weekend, however, with Israel Cycling Academy buying the Katusha-Alpecin management company from Russian oligarch and UCI Management Committee member Igor Makarov.

"I have stated for some time that ICA would be in the WorldTour, sooner or later," Adams said in a statement released by the team. "I am excited that it is happening right away for next year’s season.

"I want to thank Katusha management and its owner, Igor Makarov, for choosing to do this deal with us, as I know he had several available options," Adams said. "Igor’s contribution to our sport has been impressive, and he will continue to support our sport."

The Israeli team previously signed Irishman Dan Martin in August and will be able to retain multiple riders from the Katusha squad who are still under contract, including 2019 Paris-Roubaix runner-up Nils Politt. The team also re-signed Tour of Utah winner Ben Hermans last month.

The new team will bring in riders from the 2019 Israel Cycling Academy, but with a limit of 30 riders, there will not be places for all the riders from both 2019 teams.

Politt will be obliged to respect his 2020 contract despite interest from several teams following his second place at Paris-Roubaix. The 25-year-old German rider is expected to lead the new-look team in the spring Classics.

“We have several new riders, including some from the current Katusha team which will join, and I promise we will make some noise in lots of big races next year," Adams said. "We are just getting started.’’

Ilnur Zakarin has already confirmed he will move to CCC Team in 2020 and Nathan Haas will move to Cofidis, with Marcel Kittel announcing his retirement after taking time out from racing during the summer.

Enrico Battaglin, Jenthe Biermans, Jens Debusschere, Alex Dowsett, Reto Hollenstein, Daniel Navarro, Dmitry Strakhov, Harry Tanfield, Mads Würtz Schmidt and Rick Zabel all have contracts with Katusha-Alpecin for 2020, but some may be let go if they receive offers from other teams.

Katusha-Alpecin manager José Azevedo told Cyclingnews in September that he will not remain as team manager of the new formation, with Israel Cycling Academy manager Kjell Carlström taking charge of the new-look team. The former Finnish professional now faces a race against time to complete the UCI WorldTour registration process.

"The team has been growing each year in an organic way, both organisationally and also on the rider side, and we feel ready for this new challenge," Carlström said. "We have great chemistry on this team, and I am proud of what we accomplished together. I'm really excited for next year."

Team management have made it clear that maintaining the team’s Israeli identity is a top priority, so it is likely the team will bring along several of their Israeli riders, including Guy Sagiv, the first Israeli to finish a Grand Tour at the 2018 Giro d’Italia. Other Israeli contenders for spots on the WorldTour team include Roy Goldstein, Guy Niv and Omer Goldstein.

Israel Cycling Academy co-owner and co-founder Ron Baron said he is excited about the prospect of seeing Israeli riders racing for an Israeli WorldTour team.

"I am sure that this step will enhance our core vision to develop Israeli Cycling on the world stage," Baron said. "To see an Israeli rider in the Tour De France next season will be, for me, very satisfying."

The team, which has ridden on De Rosa bicycles for the past two seasons, have not yet said who will be the bike sponsor or what the name of the new formation will be, although Cyclingnews understands the Israeli identity will receive top billing and they will maintain their blue-and-white colour scheme.