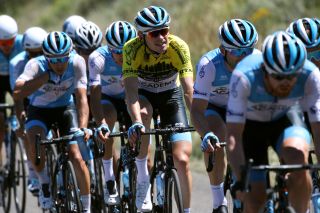 Israel Cycling Academy is poised to jump to WorldTour level in 2020 by buying out the Katusha-Alpecin team and taking their guaranteed slot in the sport's highest division.

Cyclingnews understands the deal to purchase the management company that runs the Swiss-registered team is in the advanced stages and is just days away from being finalised.

Israel Cycling Academy has made clear their intentions to move to the WorldTour as soon as possible, while the Katusha-Alpecin team’s future has been in doubt since presenting sponsor Alpecin and bike sponsor Canyon announced they were leaving.

Purchasing the Katusha-Alpecin team’s WorldTour license would be the most direct path for Israel Cycling Academy, which began in 2015 as a Continental team, to jump to the WorldTour and so get an automatic invitation to the 2020 Tour de France, one of the top goals for team co-owner Sylvan Adams.

Russian oligarch Igor Makarov no longer seems willing to bankroll the team despite being an influential member of the UCI Management Committee.

Cyclingnews understands that by buying out the Katusha-Alpecin management company, Israel Cycling Academy would keep the 11 Katusha riders who are under contract for 2020, including Nils Politt, who finished second at Paris-Roubaix.

The Israel Cycling Academy riders who are currently under contract for 2020 and 2021 would also be ensured a spot at the new WorldTour team unless they choose to go elsewhere.

With José Azevedo recently telling Cyclingnews he intends to end his time as Katusha team manager, Israel Cycling Academy manager Kjell Carlström is expected to manager the team. The former Finnish professional faces a race against time to complete the take over and WorldTour registration process.

The Israel Cycling Academy declined to comment about a possible take over when contacted by Cyclingnews.

Israel Cycling Academy recently signed Dan Martin to a two-year deal that would take the Irish rider through 2021, while current team leader Ben Hermans is out of contract this season but indicated at the Tour of Utah that he was likely to re-sign with the team.

Ilnur Zakarin has already confirmed he will move to CCC Team in 2020, with Marcel Kittel announcing his retirement after taking time out from racing during the summer.

Team management has made it clear that maintaining the team’s Israeli identity and having complete control of the program is a top priority, so it’s likely the team will bring along several of their Israeli riders, including Guy Sagiv, the first Israeli to finish a Grand Tour at the 2018 Giro d’Italia. Other Israeli contenders for spots on the WorldTour team include include Roy Goldstein, Guy Niv and Omer Goldstein.