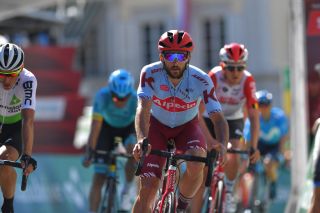 Nathan Haas will leave a Katusha-Alpecin team mired in uncertainty and ride for Cofidis next year, signing a two-year contract with the WorldTour-hopeful French team.

Haas joined Katusha in 2018 after spending two seasons with Dimension Data and his first three as a pro with what’s now EF Education First, but has struggled for results. His only victory came on stage 2 of the 2018 Tour of Oman, and he has been unable to build on his fourth place finish at the 2017 Amstel Gold Race.

The team are yet to assure the funds to continue in 2020 but Haas was already looking to move on, and liked the sound of the project developing at Cofidis under Cedric Vasseur, who took over as manager in 2018.

The French team, created in 1997, are aiming to return to the top tier of the sport and have already stated their intent in the transfer market with the acquisitions of Elia Viviani and Guillaume Martin.

“I’ve always liked being in teams that have a strong drive to progress, to get better and take a next step. That’s exactly the spirit with Cofidis and Cedric Vasseur and that’s what attracted me,” Haas said.

“What I like about this team is the opportunity to take chances in each race, to give everything so as not to have any regrets. At the Tour de France, they were pretty much in every breakaway. Naturally, I really want to ride Amstel Gold Race and the Ardennes Classics, but I also and above all want to put myself at the service of the team, notably Elia, to help them achieve new successes.”

Haas is Cofidis’ fifth signing of the 2019-2020 transfer window, following Martin from Wanty-Gobert and Viviani from Deceuninck-QuickStep, plus two lead-out men for the European champion in Fabio Sabatini (Deceuninck-QuickStep) and Simone Consonni (UAE Team Emirates).

He is the second Australian to ride for Cofidis after Stuart O’Grady, and the team pointed out he’d fit it in easily given he speaks fluent French.

“Nathan is a rider who has developed for a number of seasons at the highest level and knows the taste of victory,” said Vasseur.

“We’re very proud to welcome another Australian to the team. Nathan will bring us a new culture and a different sort of cycling know-how. He’s a rider who’s just as much at ease in one-day races as he is valuable in Grand Tours. His experience will undeniably be an asset for the team in making that step forward.”