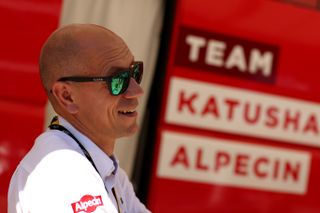 Katusha-Alpecin's general manager José Azevedo has confirmed that he will not stay at the team even if they secure a future beyond 2019. Azevedo notified the Katusha board that he will not seek a contract renewal for next year, while the squad's future remains uncertain.

Co-sponsor Alpecin and bike supplier Canyon are set to depart at the end of the current campaign, and despite reports and rumours of mergers involving several existing squads the team's future looks bleak. They have just 11 contracted athletes for 2020, and without financial clarity have not been able to sign new riders.

"We still don't have a decision. There are some possibilities and there are those in the team looking at those but we're still waiting on a decision," Azevedo told Cyclingnews at the Tour of Britain.

Azevedo denies reports that Katusha-Alpecin is certain to fold

Israel Cycling Academy in talks with Katusha team for 2020

Azevedo insisted that the 11 riders who had contracts for 2020, who include Alex Dowsett and Nils Politt, needed to refrain from negotiating with other teams, despite the uncertainty hanging in the air.  However, Azevedo insisted that those riders without deals had the management's blessing to try and save their careers.

When asked about Politt, who would have no shortage of offers given his results this season, Azevedo kept to the party line.

"He has a contract and these negotiations include the 11 riders. The team has those 11 contracts for part of the license. I understand the side of the riders though. It's September and they're worried but until a decision that's the situation."

"What we say to the riders is that every result in the races is only going to help the future. If the team continues then they have contracts for next year. If the team stops then the results will help them find another contract.

"Sometimes that's a little difficult for the head but they're professionals and they need to perform and do their jobs. The decision over the team is not in their hands."

Even if the team carries on next season Azevedo will not be part of their future. He has already alerted the board that he will not seek an extension this current contract which runs out at the end of 2019. Instead, he will look for a role on another team with the aim of returning as a director sportif.

"Regardless of whether the team continues with the team I've already informed the board of the team that I'll do my job to the end of the year and then I'll stop. My contract stops this year and then I'm desire again is to be a sports director. That's what I want to do again. For 2020 I'm free."

As is most of these scenarios it's the riders who have the most to lose. They must remain professional even though they might face the prospect of unemployment in just a matter of weeks. Azevedo insisted that the management was still trying to find a solution but when asked why a decision had taken so long he was unsure.

"I don't know," he said. "When you have a process of negotiations it's always more than one party that's involved to make a deal. To an agreement it takes time and it's a process.

"Everyone wants to hear positive news but until we have that everyone needs to wait. They're working hard to try and solution and they don't give up, otherwise, they would have said in July or August that the team stops."