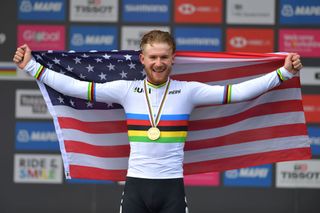 The 2019 UCI Road World Championships are well under way in Yorkshire, in the UK, with the time trials now all done and dusted for another year, and with the junior men having got the road races up and running on Thursday, with the USA's Quinn Simmons taking first place – and with it a shiny new pro contract with US WorldTour team Trek-Segafredo.

It means that just four events now remain at this year's championships, with the junior women and under-23 men's road races taking place on Friday, followed by the elite women's road race on Saturday, and then the elite men's road race bringing the curtain down on proceedings on Sunday.

The likes of French Tour de France hero Julian Alaphilippe and 2012 champion Philippe Gilbert will go up against Slovakia's three-time world champion Peter Sagan in the 284.5km elite men's event. Young pretenders Mathieu van der Poel, of the Netherlands, and Remco Evenepoel (Belgium) will also look to upset the applecart and delight their legions of fans.

Meanwhile, in the women's race, on Saturday, it'll be hard to look past the powerful Dutch squad for the winner, which features defending champion Anna van der Breggen, three-time world champion Marianne Vos and this year's Giro Rosa winner, Annemiek van Vleuten – although last year's silver medallist, Amanda Spratt, and her strong Australian team, will be trying to give them a run for their money.

You won't want to miss a moment, and Cyclingnews will have full coverage of the racing right here on the site, besides the viewing options below.

The UCI's own YouTube channel will also provide coverage of select races.

How to watch the World Championships live stream: UK

The World Championships are being shown in the UK on both the BBC and Eurosport, with the latter able to be found in basic Sky TV packages. With a Eurosport Player monthly or annual pass, you can access the live stream from just about any internet-connected device. You can try it out for free.

Australians can watch the 2019 UCI Road World Championships on SBS, through SBS OnDemand, or on the SBS Cycling Central website, with live TV coverage of the men's and women's road races scheduled to be shown on SBS Viceland. Eurosport in Australia will also cover the Worlds.

How to watch the World Championships live stream: North America

The 2019 World Championships are being streamed live in the US at Fubo.TV. Fubo.tv has a broad sports offering with dozens of different networks in a package that costs $19.99 to try for a month, then $44.99 per month beyond that. To view the Worlds, you need to also purchase the International Sports package for $11.99 per month for customers to be able to access the races.

Select Worlds events are also being streamed in the US on the Olympic Channel and via NBC Sports Gold, with cycling passes available for the latter $54.99, which cover you until May 1, 2020.

In Canada only, the Worlds will be available on Flobikes.com, with subscription packages starting from $12.50 per month.