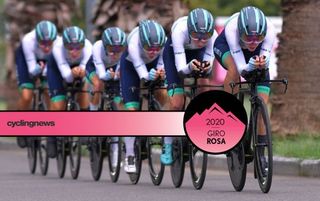 As the Giro Rosa got under way with a 16.8km team time trial in Grosseto, all eyes were on the WorldTour teams and the GC favourites within their midsts. While the podium places were in line with pre-race expectations, with Trek-Segafredo taking the win, followed by Boels Dolmans and Mitchelton-Scott, it was Equipe Paule Ka that surprised and impressed with fourth place.

Aside from Trek's storming win, averaging 50.1kph, the standout ride of the stage came from the Continental team, which finished just five seconds off the podium and 10 seconds down on the winners, bettering six WorldTour teams.

The Swiss team has claimed plenty of top results in its previous incarnations in the past, and has been punching above its weight in the WorldTour in this re-started season. Since the team changed sponsors during lockdown, American Leah Thomas has placed third at Strade Bianche and British rider Lizzy Banks has taken second at the GP Plouay.

The squad is racing in Italy without its team leader, Clara Koppenburg, who was forced to pull out at the last minute due to an injured foot. Former Giro stage winner Lizzy Banks detailed how the team has thus been forced to reevaluate its aims for the race.

"We immediately changed our plans, and we're going to have a slightly different ambition in this tour than we would have had otherwise, but I think it makes it really exciting."

Of the team members Paule Ka have at the race, she said, "It's a pretty dynamic Giro and we've got a pretty dynamic team, so it gives us opportunities to go wild and do whatever we want really."

Implying that the absence of a GC leader to work for meant more opportunity to hunt stage wins, she added, "Obviously, we're sad to lose Clara, and we hope she recovers fast, but I think we still have a really strong team, and we still have loads of opportunities here."

Banks conceded that although it was disappointing to narrowly miss out on a podium spot, the team's fourth position was far better than might have been expected of a smaller squad.

"I think that's a really strong performance from our small Continental team, and we've beaten a lot of big teams. If you see the preparation that teams like Canyon-SRAM have put into the TTT, and the amount of money that they can put into it compared to a small team like ours, then I think it's something we should be really, really proud of."

All eyes may be on the main GC battle from tomorrow, but the plucky Continental squad has certainly proven itself as one to watch, too.