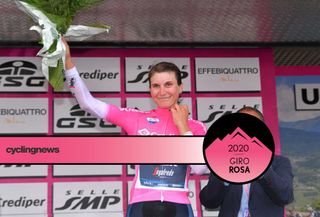 In 2008 overall Giro Rosa winner Fabiana Luperini was the last Italian to wear the Giro Rosa leader's jersey. Twelve years later, Elisa Longo Borghini (Trek-Segafredo) could throw her hands up in victory when she and her team won the opening team time trial, putting the 28-year-old all-rounder in the pink jersey.

Longo Borghini is Trek-Segafredo's leader for the nine-day Italian stage race, but the team did not explicitly plan for her to cross the line first in the TTT and become the race leader.

"It just happened," Longo Borghini said. "In the end, it is a team effort, it does not really matter who is crossing the finish line first. I was the last one taking a pull. Ellen [van Dijk] swung off, I went through the roundabout and found myself at the front. Maybe you could say that having the maglia rosa on the first day is not ideal, but I am not a rider that wins a lot, so I enjoy victories, and it is a great feeling."

Giro Rosa: Elisa Longo Borghini ready to throw the hands up in victory

In the 2017 Giro Rosa, Longo Borghini was second overall, only beaten by Anna van der Breggen. The mountainous routes in the past two years were not to her advantage, though she finished in the top 10 both times and was some distance off the podium.

This year's route is less mountainous and less geared to the climbing specialists - skipping the Alps and instead crossing the Appennines with plenty of shorter climbs, arguably giving Longo Borghini a better chance at a top overall result. The TTT victory has been a big first step in that direction.

"We have been targeting this stage because it really suited the team," Longo Borghini emphasised about the value of the victory. "It is a team victory, and I wish I could share my maglia rosa with my five other teammates. Without them, I could not have done this.

"It is an emotional moment for me, even though I do not really realise it yet. I have never been in this pink jersey before, and I have never been in such a good environment before. It is just really, really nice. I want to thank the entire Trek-Segafredo team and everyone who was close to me during the lockdown for their support. Now we have to take it day by day, we have to keep our feet on the ground."

The Trek-Segafredo team now have the burden of defending the race lead. Next is stage 2 with its hilly finish that also includes a climb on gravel roads that will not be easy to control.

However, Longo Borghini has a strong team to support her. UCI Women's WorldTour leader Lizzie Deignan, in particular, will be eager to repay the excellent teamwork Longo Borghini displayed in La Course, and French champion Audrey Cordon-Ragot, Dutch rouleur Ellen van Dijk, and US duo Tayler Wiles and Ruth Winder, after sharing the TTT victory on stage 1, can all be expected to put themselves in Longo Borghini's service.