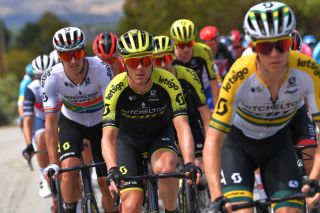 Mitchelton-Scott team owner Gerry Ryan has described the shake-up in team management as a "new era" and said the team is "back on track" and being built for 2021-2022, with talks ongoing with possible new sponsors.

The Australian men's and women's WorldTour team have endured a difficult and confusing three weeks since announcing the team would be known as Team Manuela Fundación and new blue and pink colours were unveiled.

Ryan has since decided not to proceed with the sale of the team to Spanish businessman Francisco Huertas, promising to pay rider and staff salaries in full from August after cutting them to just 30 per cent when the COVID-19 pandemic hit his business interests.

The Manuela Fundación has now conceded it will not take over the team and is looking at other options, while long-standing team manager Shayne Bannan, who helped create the team in 2012, has been removed. Ryan has appointed Brent Copeland, who was until last year the team manager at Bahrain-Merida, as the team's new manager, with former commercial adviser Darach McQuaid becoming chairman, a new role that will have a direct liaison with Ryan.

Ryan has kept a low profile during the chaos but gave some of the reasons for his decisions to Ride Media.

"I’m keeping well. Been busy reorganising and restructuring a cycling team. It’s had a positive response so far, so we are on course for a new era and we move forward. And we’ve got lots to do. So, you never look back, you look forward," Ryan told Ride Media in a brief exchange.

"I’ve known Brent for the last couple of years. Shayne introduced me to him and we’ve been at the same hotel with our teams and I was impressed with his style. I thought he’d be a great fit for the team."

Ryan and Bannan have worked closely on the running of the Mitchelton-Scott team over the years, with Ryan's love for the sport clear to see during visits to the Tour Down Under, the Giro d'Italia and Tour de France. It appears that Bannan and experienced management figure Alvaro Crespi were the driving force in the talks with Manuela Fundación but something sparked the end to their relationship.

"He’s done a wonderful job but it’s time for a change and a new direction," Ryan said of Bannan, when asked about the Manuela Fundación project.

"We had different philosophies in the end, different visions of where we were going."

Rather than reveal any further details, Ryan looked to the future.

"It’s heads down. A) To finish the season. Hopefully we can get the riders back on the bike and make sure that the protocols for COVID-19 are set in concrete. Our situation is: the health of the riders, first. Safety is taking a priority. It’s a big task for every team to make sure we stick to a plan," he said.

"And, B) We want to get back racing and build the team for 2021/2022… We’ve got a few sponsors who we are working on, ones that we were talking to before we had a little diversion, but we’re back on track."