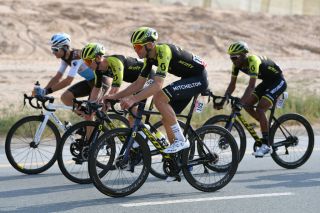 The aftermath of failed Manuela Fundación takeover of Mitchelton-Scott has seen a massive shakeup in the upper echelons of the team as general manager Shayne Bannan and experienced management figure Alvaro Crespi leave the squad and Brett Copeland, formerly with Bahrain-McLaren and Darach McQuaid moving into senior posts in the Australian WorldTour team.

Copeland will take over from Bannan as general manager, effective from Wednesday July 1st, while Darach McQuaid will have a top role although his exact responsibilities are not yet officially clear.

Team owner Gerry Ryan is also understood to have told the squad’s riders and staff that he will have no further dealings with Manuela Fundación, despite the recent offer of €10 million by the Spanish NGO to purchase the World Tour licence.

Although it has not been specified by Mitchelton-Scott as a reason for their departure, Bannan and Crespi were both reportedly heavily involved in the failed takeover bid by Manuela Fundación that was made public a few weeks ago and there will inevitably be speculation that their sudden, mid-season exits are linked to the dramatic U-turn in the squad’s possible switch to becoming Spain’s second WorldTour team.

Bannan is understood to have been a key player in the two-weeks of negotiations with Manuela Fundación, with former Giro d’Italia winner Stefano Garzelli heading the Spanish delegation.

But despite a press release being issued from the Mitchelton-Scott team confirming the takeover, the UCI approving the new jersey, and team vehicles being on the point of being repainted in new colours, the team owner Ryan claimed just a few days later other sponsors were still potential backers for the team and a few days later, the entire Spanish-Australian deal disintegrated.

Ryan then promised he would underwrite the team’s future at least through 2021 and return the squad to their full salaries - which had shrunk to 30 percent during the spring this year - by August. But Bannan and Crespi were no longer to form part of the team’s future.

Both Bannan and Crespi have been long-term stalwarts in the team, Bannan working as general manager ever since the squad began in 2012 and Crespi, formerly a finance manager in the legendary team, also widely considered to be an important player in the upper echelons of the team management.