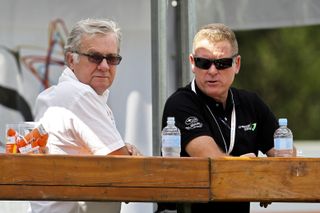 Mitchelton-Scott owner Gerry Ryan has said that he will continue to own the team and its WorldTour licence following its rebranding as Manuela Fundación, which is due to come into effect on July 1.

Last week, the Australian team announced that the Spanish non-profit organisation, founded by Francisco Huertas, will take over sponsorship of the team when the season resumes, thus ensuring its survival into 2021.

Ryan told Ride Media on Wednesday that he is still negotiating with additional sponsors for the team, which he said will retain an Australian identity, despite claims from the Manuela Fundación that it will become a Spanish team.

“To answer your question, I own the team,” Ryan said.

“I think that one of his junior people spoke to the media about potential opportunities they’d like to see: a training base in Spain… but there’s certainly no ownership changes at this stage.

“It’s an Australian-registered team. Right. You just don’t change team licences… It’s a process if it was to happen. So, I still have the ownership of the team and the licence.”

Emilio Rodríguez, who oversees the Manuela Fundación’s sports department, told Cyclingnews last week that the rebranded team will establish a service course in Granada. “It'll be a Spanish team, and we have to be proud of that,” he said.

To transfer a team license, though, the process must first be approved by the UCI's License Commission, with the governing body announcing any license change or confirmation via press release. According to Velonews, the UCI is still to receive further documentation to present to the UCI’s licensing commission. The team is still named as Mitchelton-Scott and carries an Australian flag on the UCI website register.

Ryan suggested to Ride Media that GreenEdge had been premature in announcing the arrival of Manuela Fundación as a new sponsor, explaining that general manager Shayne Bannan must still finalise the deal, while the team also remains in negotiations with additional sponsors.

“Well, the release probably went a bit early, as Shayne is in Spain next week trying to finalise the sponsorship and other opportunities. So, I’ll have more to say next week but, in the meantime, we’re still negotiating for a couple of other sponsors as well for next year,” Ryan said.

“I’m looking at different options. There’s no doubt we’ve been approached to do a couple of joint things together with some other sponsors that we’re trying to lock in for next year as well. We’re weighing up all our options.”

Mitchelton-Scott, which entered the WorldTour in 2012 under the GreenEdge banner, imposed a reported 70 percent cut on rider and staff pay earlier this year as a result of the coronavirus pandemic, but Ryan said last week that the arrival of Manuela Fundación’s sponsorship would “ensure [the team’s future] in 2021 and beyond.”

On Tuesday, a report by CyclingTips suggested that the team's riders and staff will continue to be paid just 30 per cent of their salary for the remainder of 2020, despite the arrival of Manuela Fundación.