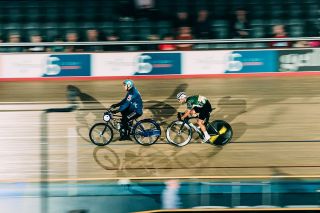 Mark Cavendish took his first win of the 2019 season on the opening night of the Six Day London on Tuesday.

The 34-year-old beat Caleb Ewan to the line in the 40-lap Derny race. Ewan had lead the race until one lap to go, before Cavendish came over the top of the Lotto-Soudal rider to take victory.  Andreas Muller finished one place behind Ewan, in third.

"That was hard. I stayed at the back of the field, to just suss out how everyone was going," said Cavendish, who rode behind veteran Derny pilot Michel Vaarten.

"Caleb jumped earlier than I thought and that was tough, it was right until the line. I was lucky I had Michael. We’ve raced together for many years now and I’m feeling good."

Signing Mark Cavendish will improve me as a sprinter, says Bahrain-Merida's Colbrelli

Cavendish has endured a frustrating season on the road this year. He told reporters in May that he had recovered from the Epstein Barr Virus that had dogged him for the last two years but he failed to gain selection for the Tour de France in July after Dimension Data manager Doug Ryder overruled his own sports directors after they had originally  selected the Manxman.

Since then Cavendish has used the second half of the season to gradually rebuild his form and condition. He is expected to sign for Bahrain-Merida for the 2020 season but for now his focus is on the track and enjoying the experience of the London Six Day. He is due to ride the Gent Six with Iljo Keisse in mid-November.

"It’s always great in London. I got a great reception from the crowd when I came out and that was amazing." In the evening’s other events, Cavendish and his race partner Owain Doull finished fifth in the Madison Chase, and fourth in the Team Elimination race, which was one by Italian pair Elia Viviani and Simone Consonni. Americans Adrian Hegyvary and Daniel Holloway won the Madison Chase event.

After one night of racing, however, Bryan Coquard and Donavan Grondin lead the overall standings with Cavendish and Doull down in seventh place. The racing continues on Wednesday with Day 2.

And breathe 😯💨One down, five to go 🖐The curtain was raised on #SixDayLondon 2019 with some searing-hot cycling 🔥Favourite moment?? pic.twitter.com/LPv2QLmXewOctober 22, 2019