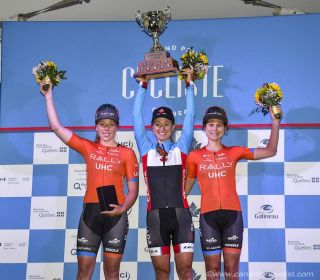 Organisers of the Canadian UCI 2.2 men's Tour de Beauce and UCI 1.1 women's Tour de Gatineau and Chrono féminin de la Gatineau have made the decision to postpone the 2020 editions due to the novel coronavirus pandemic.

Tour de Gatineau and Chrono women's events were schedule to take place on June 4 and 5, while the men's Tour de Beauce was scheduled to run from June 17 to 21.

The UCI has extended the suspension of all road racing and other events until Monday, June 1, as it tries to create a new post Covid-19 calendar for the second half of the season.

Even though the Canadian events fall outside that suspension timeframe, Cycling Canada has recommended all events be postponed until June 14 based on stronger restrictions from the Canadian Government in response to the pandemic.

"In order to continue to support the efforts from public health authorities to minimize the transmission of the virus, and to reduce the pressure on athletes and members, Cycling Canada is now recommending that all cycling events on the Cycling Canada calendar be postponed or cancelled until June 14th," read a statement published on Cycling Canada's website.

Cycling Canada will give the highest rescheduling priority to national championship events, UCI-sanctioned events and then national calendar events. However, events that are scheduled on dates included in the resumed season will have the right to maintain their calendar placement and sanction, subject to UCI approval.

"All organizers who have made the decision to postpone their event will be asked to submit their two preferred postponement dates. Cycling Canada cannot guarantee that the dates presented will be accepted, but will make an effort to try and accommodate when the 2020 season resumes."

"The Tour de Gatineau organization is committed to working closely with municipal, provincial and federal partners as well as cycling governing bodies to monitor the situation and determine the best possible date for re-scheduling the 2020 event," the organisers stated in a press release Friday.

"Public health remains our number one priority, and as such all decisions regarding the re-scheduling of the event will fall within guidelines outlined by public health officials.

"We would like to thank all of our supporters who have stood behind us during this difficult time, and remain optimistic that our event will once again unite some of the World’s top female cyclists in the wake of this global pandemic."

Tour de Beauce, in its 35 edition, is the nation's longest-running UCI men's stage races that has annually attracted some of the top riders and teams from around the world.

"The event, which brings together riders from more than 20 countries for each edition, cannot be prepared and cannot be held under the conditions prevailing on the dates initially scheduled (June 17 to 21)," orgnaisers said in a press release issued last week.

"The organization is currently considering an alternative date with its partners before postponing to 2021. A final decision will be announced very soon."

The Tour de Beauce organization also has the Elite, Junior and Para-cycling Canadian Road Championships scheduled for June 25-28, however, a decision will be made later with regard to this event and in collaboration with Cycling Canada.