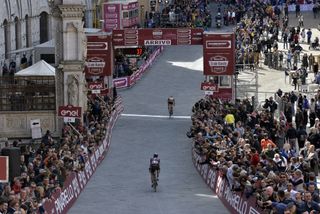 La Gazzetta dello Sport has described the upcoming Italian races as hanging by "a thread of hope" as more and more teams are deciding not to race in March, but RCS Sport is still hoping to organise the men's and women's Strade Bianche races, Tirreno-Adriatico, Milan-San Remo and the Tour of Sicily.

The organisers are meeting with local authorities in Siena this morning, with a statement on the race's viability expected to come later this afternoon.

On Wednesday evening, the Italian government issued a drastic decree, ordering the closure of schools and universities and a halt to all public and sport events. Only events held behind closed doors with no public can go ahead but the events have to respect strict guidelines to limit the risk of spreading the Covid-19 coronavirus.

Football matches will go ahead with no public allowed in the stadia and the organiser of the Ski World Cup finals in Cortina hope to keep their event alive. However the nature of road racing means it is very difficult to limit contact between riders, the public and amongst race staff.

Mauro Vegni, the head of cycling at RCS Sport admitted it would be difficult to put on races under the provisions of the decree but RCS Sport have refused to throw in the towel. A meeting with local authorities could lead to a final decision on Thursday afternoon.

The Strade Bianche Gran Fondo ride planned for Sunday with 7,000 participants has been cancelled with the plan to hold it at a later date in the year, but RCS Sport hopes to secure the green light to put on the Strade Bianche races.

"Regarding the bike races Strade Bianche (7 March), Strade Bianche Women Elite (7 March), Tirreno-Adriatico (11-17 March), Milano-San Remo (21 March) and Il Giro di Sicilia (1-4 April), RCS Sport will communicate the updates and details in the coming days, following the meetings with the appropriate authorities, starting from the meeting with the Prefecture of Siena tomorrow (Thursday) morning," RCS Sport said in a statement on Wednesday evening.

RCS Sport face a race against time if they want to organise Strade Bianche on Saturday and have to find a way to put on the race and broadcast it on television while respecting the government decree and protecting the health of the public, riders and race staff during a major health crisis that has resulted in 2,703 confirmed cases of the coronavirus, 107 deaths and 295 people in intensive care in hospital.

More than 80 per cent of the cases are in the northern Lombardy, Veneto and Emilia Romagna regions, 200km away from Siena but further isolated cases are being discovered across Italy hour by hour, putting the health service and local authorities under huge pressure.

La Gazzetta dello Sport suggests the Piazza del Campo in the centre of Siena that hosts the finish of Strade Bianche could be closed to the public, with similar solutions for each of the seven stages of Tirreno-Adriatico as it crosses central Italy from Camaiore in Tuscany to San Benedetto del Tronto on the Adriatic coast.

However the decree makes it clear that if sporting events are allowed to be held, the organisers "are obliged to carry out the necessary controls to limit the risk of diffusion of the Covid-29 between athletes, staff management and all the support staff that take part."

Which teams and riders will ride?

The men's and women's Strade Bianche are part of their respective WorldTour and so include the best teams in the sport. However a growing number of teams have said they will suspend their racing programme for much of March, including Team Ineos, Astana, Mitchelton-Scott, Jumbo-Visma, and EF Pro Cycling.

With riders from Groupama-FDJ stuck in quarantine in the UAE after several cases of the coronavirus were confirmed by local authorities, the French team has confirmed they do not have the riders and staff to race in Italy during the next two weeks. Parkhotel Valkenburg and CCC-Liv have withdrawn from the women's race.

Fourteen doctors from 11 leading professional cycling teams have written to race organisers ASO and RCS Sport, and the UCI, requesting the cancellation of upcoming races, including Paris-Nice that is due to start on Sunday, due to the developing coronavirus outbreak. They criticised ASO and RCS for a lack of a 'robust plan' when it comes to addressing concerns about the spread of the coronavirus.

It is unclear if RCS Sport will try to draft in smaller ProTeams and Continental teams to replace teams that pull out.

The UCI held a meeting and conference call with the key stakeholders of the sport on Wednesday. They decided not to cancel any events, with any final decision "taken by the health authorities in the concerned regions depending on the evolution of the local situation and different risk factors identified."

The UCI said that each race organiser "must take a certain number of measures with the aim of limiting to a maximum the risk of the coronavirus spreading further."

These include increasing the distance between the public and riders, particularly in the start and finish zones; respecting a strict medical protocol, variable depending on the country, including a process for dealing with suspected cases and diagnostic tests for the coronavirus. The number of teams staying in each hotel will also be limited and certain hygiene measures must be respected.

The UCI explained that if a race organisers are required by their local authorities to refuse the participation of certain teams or if teams find themselves unable to take part in an event for a valid reason, the UCI will decide on measure with a case-by-case basis to ensure that no team is penalised either financially or when it comes to evaluating their UCI WorldTeam or UCI ProTeam status.